Details have been announced of the 22nd annual William Carleton summer school. The programme for 2013 was  launched at the Hill of the O’Neill Centre/Ranfurly House in Dungannon in the presence of the Mayor of Dungannon and South Tyrone Borough Council, Cllr Phelim Gildernew. He was presented with a copy of “The Authentic Voice”, edited by Gordon Brand and illustrated by Sam Craig, which contains articles about Carleton based on lectures to the summer school in previous years. 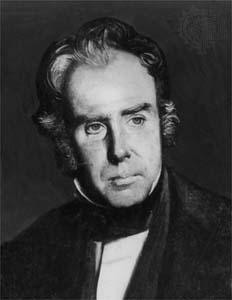 The summer school opens at 11:30am on Monday 5th August at Corick House Hotel in Clogher. The starting time has been put back to enable more people to attend who might have to travel, especially our friends and supporters in the Dublin area. Our Honorary Director Professor Owen Dudley Edwards will speak about Carleton, Caesar Otway and Irish literature. Otway was a Protestant clergyman in Dublin whose influence on the writer came at an important time in his career. Professor Thomas O’Grady from Boston will speak about “The Geography of the Imagination: Carleton’s story “The Donagh”. The final talk of the day will feature the broadcaster and poet Tom McGurk, who comes from Brackagh in County Tyrone, in conversation with one of his contemporaries at school, Aidan Fee, about Northern Ireland, past and present.

On Tuesday 6th August there will be a discussion about language in the 19thC Clogher Valley. Dr Ciaran Mac Murchaidh, St Patrick’s Drumcondra will talk about Irish and Ulster Scots will be the topic for  Dr Ian Adamson. There will be a session on literature with Ciaran Collins “The Gamal”, Tony Bailie, and Patricia Craig “Twisted Root”. Josephine Treanor will talk about her relative, Anne Duffy, the Miller’s Daughter from Augher, one of Carleton’s first loves.

Wednesday 7th August is devoted to dealing with the past and will feature Professor Jon Tonge (Liverpool), Mary O’Rourke on how different political strands can be accommodated, poet Siobhan Campbell and Mary Kenny talking about Edward Carson, unionist, Dubliner and Irishman. Actor Patrick Scully will present his one-man show on Carson, which he performed recently at the Lyric Theatre studio in Belfast.

The final day, Thursday 8th August, Gordon Brand and summer school deputy director Frank McHugh will act as guides for the annual coach tour. This year it will go to the neighbouring county of Fermanagh. It will focus on the work of Shan Bullock, who wrote “The Loughsiders”, based in the area around the Crom estate. The tour will depart from Corick House in Clogher at 10:30am and advance booking is necessary at wcarletonsociety@gmail.com.

This year there will be a number of events in Monaghan and Emyvale (which has a Carleton connection) preceding the summer school. On Friday 2nd August there will be a one-day conference at the Four Seasons Hotel, CARLETON, KAVANAGH and GAVAN DUFFY. Admission is free and the event is funded by the EU Peace III programme of Monaghan County Development Board.

Professor Thomas O’Grady from Boston will read some of his poems and talk about his research on the Monaghan poet, Patrick Kavanagh. Art Agnew from Inniskeen will read selected extracts from Kavanagh’s works, including The Green Fool. The afternoon is devoted to a study of Monaghan man Charles Gavan Duffy, a devotee of Carleton and one of the influential people who helped the writer to obtain a civil list pension in 1848. The speakers will be Brendan O Cathaoir from Bray and Aidan Walsh, a heritage consultant who was the first curator of Monaghan County Museum. Monaghan poet Mary O’Donnell, one of the William Carleton Society’s patrons, will read from some of her works. The programme will conclude with a talk on “The Shemus Cartoons” from the Freeman’s Journal by Felix M.Larkin from Dublin.

I am also pleased that the William Carleton Society will be hosting the launch of a book, “Memories Amidst the Drumlins: Cavan and Monaghan“, containing some of the poems and stories written about the area by the late Terence O’Gorman from Tydavnet and edited by his daughter, Patricia Cavanagh. Terence was a regular visitor to the summer school and many other similar events throughout Ireland.

On Saturday 3rd August, Grace Moloney of the Clogher Historical Society and Theresa Loftus (Monaghan Museum) will lead a walk through Monaghan town, starting at the Museum at Hill Street at 11am. This event is free. The following day, Sunday 4th August, there will be a ceremony to mark the Carleton plaque at the Blue Bridge near Emyvale. At 8pm in Emyvale Leisure Centre, the Carleton Players will perform a reading of the “Fair of Emyvale”, adapted by Liam Foley. 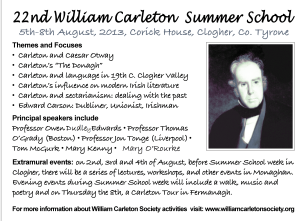