Riding for the Disabled group in shadow of former Maze prison

It was an a-mazing second day at the Balmoral Show. Standing in the shadow of two watchtowers, a security wall and other reminders of the former high-security jail, I met  a group from the Riding for the Disabled Association (whose President is the Princess Royal, sister of Prince Edward, who opened the show yesterday). They came from clubs in Newtownards, Banbridge and included some members of the RDA Ireland from Monaghan.

I was at the Maze only once during its previous existence as a high-security prison. Making a radio programme for BBC Radio Birmingham in the mid-1970s, I spent a night with a British Army regiment known as the Birmingham Gunners (39 Medium Regiment Royal Artillery) in the military base on one part of the site.

I remember it was around the time of St Patrick’s Day and I eventually found a suitable spot to drown the shamrock. Next day I was taken in a Land Rover on one of their perimeter security patrols and was also shown into one of the watchtowers. From there I could see a group of prisoners exercising in one of the H-blocks. One of them was running around the large cage and when he spotted a face in the observation post, he made a two-fingered gesture and shouted towards his “audience”.

The Gunners did four “emergency” tours of duty in the North in the 1970s, the first to Fort George in Derry in 1973, which, like the Maze, is now earmarked for a regeneration project. At the time of their deployment at the Maze, the squaddies were also in Craigavon and some were stationed at the border checkpoint at Aughnacloy. Some years previously in 1969 while on exercise in Libya, the Regiment found itself caught up in the military coup of the then Captain Muammar Gadaffi against the government of King Idris. 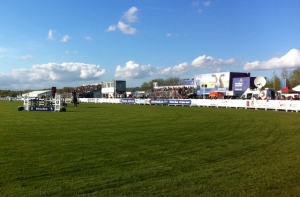 Now after some 37 years I was back at the Maze, but in a very different context. With thousands of cars parked on hard standing all paths from the car park led to the main entrance of the 145th annual Royal Ulster Agricultural Society show. This event transferred from the King’s Hall complex at Balmoral in Belfast is helping to bring a promising future to the site of the former jail.

The transformation is being carried out by the Maze Long Kesh Development Corporation. Programme Director Kyle Alexander confirmed to reporters this evening that funding for the development of a Peace-building and Conflict Resolution Centre is expected to be in place by the end of this year. Although the Corporation wants to emphasise that the 347 acres should be a shared site, some unionist politicians and loyalists have protested that the preserved hospital and one H-block from the prison should not be allowed to become a “shrine” for the republican hunger strikers who died there.

Meanwhile the show will continue for a third day, with initial traffic problems apparently sorted, although the delays in arriving now seem to have been transferred to departure from the site. There are plans to build a slip road to the nearby M1 motorway in 2015, which would ease congestion along the narrow access roads around the complex. RUAS President John Bamber was pleased with the opening day of the show and said he hoped the traffic management plan put into place with the PSNI and Roads Service would help to ease congestion, especially for those travelling from West of the Bann.