For over ten years Harold Bennett from County Tyrone has been devoted to preserving an important part of Ulster’s industrial heritage. Ennish Flax Mill between Aughnacloy and Dungannon is the third generation of his family to own the mill., which closed in 1950. In the early 2000s he decided to renovate the mill, a project which has taken considerable time, money and effort an is still a wok in progress. He has been supported in his efforts by the Killeeshil and Clonaneese Historical Society, which is currently undertaking a project on engineering in the area under the “Shared History, Shared Future” project, of which the William Carleton Society is a member. 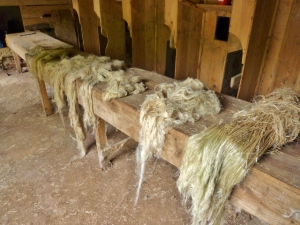 An open day and barbeque was held at the mill to show it in operation and to give a younger generation an idea of how the mill operated. Ennish started off as a corn mill around 1770 and was owned by the Burges family of Parkanaur Manor near Castlecaulfield. In 1917 William S Bennett purchased the mill from Colonel YS Burges for £255. At that time the flax industry, which was important in Ulster in the 18th and 19th Centuries, was booming. The mill was converted to process flax, which was first scotched in October 1917. 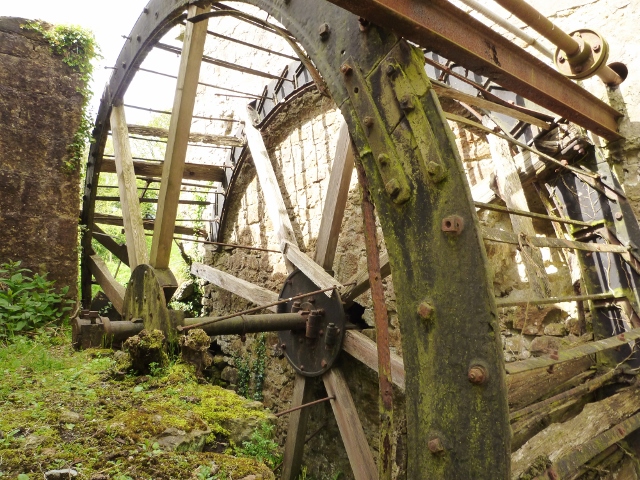 Up to 1944 the mill was driven by the mill wheel but because of dry seasons there was insufficient water to turn the wheel. The then owner, William Bennett’s son Hugh John, was obliged to instal an engine to drive the mill. It was installed by AS McKee & Sons of Cranslough, who also carried out a number of renovations in order to accommodate the new engine. Farmers came from surrounding areas such as Crilly, Minteburn, Rehaghey, Brantry, Newmills, Clonavaddy and Castlecaulfield to get their flax scutched. After flowering and ripening in July, the farmers pulled the flax by hand and then soaked it in a water-filled dam for one to two weeks to ret (break down the outer coating). It was then spread on a field to dry before being taken to the mill.

Scutching handles behind the berths

The mill has seven “berths”, the space in front of each flax handle where the scutchers worked. Sometimes they worked in pairs. The first was a “buffer”, who took the rough off the flax, the second was the “cleaner”, who completed the scutching. Good flax could be scutched into long, strong fibres, which could eventually be turned into fine linen cloth. When the scotching was finished, the flax was taken to Union Street in Cookstown for inspection and if it passed the grading process, it was then taken to a linen mill in Belfast and woven int linen fabric. The poorer quality flax containing many shorter fibres was called “tow” and was less valuable. Any cloth made from it was rough and inferior. Usually the mill owner kept the tow as payment or part payment for the scutching.

The waste from scutching known as “shoves” or “shows” was a cheap and popular fuel on the hearths of mill workers. A properly lit fire of shoves would burn for hours, emitting an intense heat. It must have been difficult for the seven scutchers working in a confined space and with the noise of the machinery as well as the dust. Harold’s demonstration gave an idea of what conditions must have been like for them, but this picture was with only one blade in action!

According to the mill records for 1945, the workforce consisted of six scutchers, three strickers, one roller and a handyman, whose job it was to remove the shoves from behind the handles. Scutchers were paid by the number of stones scutched and in a good week would earn between £3 and £4. The roller was on a set wage of £2.14.6 and the strickers earned £2.10.0 a week. In 1918 scutchers were paid a bounty of £6.0.0. to secure their services for the next scutching season. The details are taken from an information leaflet kindly provided by Harold Bennett.

This is one of only three such flax mills still remaining in Northern Ireland. Another one is at Gorticashel near Gortin, also in Tyrone. The scutching  demonstration was complemented by a display of threshing in the adjoining field. The straw was brought in for the occasion. The thresher carried the name “Boyd” and appeared to come from Maghera.

While researching the history of the linen industry, I discovered a newspaper cutting from the USA which shows that even before the new engine was installed at Ennish, the linen industry was in decline. The Delmarva Star from Wilmington in Delaware carried a report on March 3rd 1935 (p.22) headlined: “Shortage of Flax Threatens Ulster Makers of Linen: Numbers of Mills Face Necessity of Closing Down: Prices Have Made Unexpected Rise“. The news from Belfast (March 2) states that:-

Unless the crisis in the industry is overcome within the next few months, numbers of linen mills in Northern Ireland will be faced with the necessity of closing down.

The outstanding reason for the present crisis is a shortage of flax from Soviet Russia. The linen mills of Northern Ireland, which employ about 85,000 workers, are dependent on Soviet Russia for more than 90 per cent of their raw materials. The Soviet Union itself is the world’s biggest flax producer, growing between 90 and 95 per cent of the world’s total flax supply.

In recent months Germany has bought ever-increasing quantities of Russian flax to take the place of wool and cotton which it has been unable to import owing to exchange restrictions. At the same time the Soviet Union itself has begun to absorb large quantities of its own raw flax to manufacture in its new factories.

The result of these unexpected developments has been a leap upwards in the price of flax. Ulster linen manufacturers state that they have only sufficient flax on hand to meet the needs of the next four or five months, after which they expect the cost of flax to be so prohibitive that it will be impossible to produce linen goods in Northern Ireland at economic prices.

With a steep rise in the price of linen goods expected the next few months, it is understood that United States and other foreign importers of Irish linen have made large purchases in Belfast before prices soar still higher“.