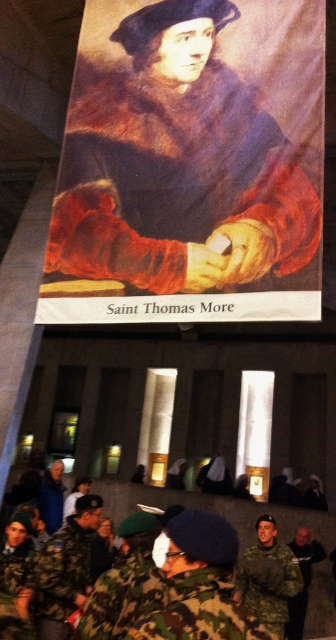 This is the feastday of St John Fisher and St Thomas More in the Roman Catholic calendar. The Church of England commemorates him two weeks later on July 6th. It was a tweet from @NewDawnYouth (conference in Walsingham) that reminded me of the occasion and prompted this article. It led me to another by a tweeter who has styled himself @fisherandmore.

Edmund Montgomery is a deacon in the Catholic diocese of Shrewsbury in England who is being ordained a priest today at Our Lady & St Christopher’s in Romiley near Stockport in Greater Manchester by Bishop Mark Davies. By the time this is published, he will be officially Fr Montgomery and congratulations go to him on his big day.

This large picture of More was photographed by me during the international military pilgrimage last month in Lourdes, in which contingents from the Irish Defence Forces along with the Royal Navy, British Army and RAF took part. More’s image is one of many saints (including Patrick) which hang between the concrete beams of the underground basilica of St Pius X.

Thomas More was born in Milk Street (off Cheapside) in the City of London in 1478, the son of a successful lawyer. In 1504 he was elected to Parliament to represent Great Yarmouth and subsequently London, serving as one of the two undersheriffs of the City of London. In 1514 he was appointed as a Privy Councillor and was knighted and made under-treasurer of the Exchequer in 1521. He was secretary and personal adviser to King Henry VIII, an influential person on government and was elected the Speaker of the House of Commons in. 1523. He became Chancellor of the Duchy of Lancaster two years later.

More was an opponent of the Protestant reformation. He became Lord Chancellor in 1529, just as Henry had become determined to obtain a divorce from Catherine of Aragon. When the King declared himself ‘supreme head of the Church in England’ – thus establishing the Anglican Church and allowing him to end his marriage – More resigned the chancellorship. He continued to argue against the King’s divorce and the split with Rome, and in 1534 was arrested after refusing to swear an oath of succession repudiating the Pope and accepting the annulment of Henry’s marriage. He was tried for treason at Westminster and on 6th July 1535 was executed at Tower Hill.

He was canonized by Pope Pius XI in 1935 as one of the early martyrs of the schism that separated the Church of England from Rome.  Pope John Paul II declared him “the heavenly Patron of Statesmen and Politicians”. The full proclamation on October 31st 2000 can be found here.

John Fisher was appointed Bishop of Rochester in Kent by Henry VII in October 1504 and served in that position for over 30 years. I saw the Cathedral when I walked past it in April on my way to Gillingham Football Club. For his story, I point to a summary on the website of the John Fisher school in Purley, the only school to be named after him prior to his canonisation by Pope Pius XI in 1935.

Saint John Fisher (October 1469 – 22 June 1535) who came from Beverley in Yorkshire was a Bishop, Cardinal and Martyr. He was executed in the Tower of London by order of King Henry VIII during the Reformation for refusing to accept him as Head of the Church of England. On June 22nd 1535, John Fisher was taken from his cell in the Bell Tower to be executed for treason. In the Decree of Beatification issued by Pope Leo XIII on 29th December 1886, when 54 English Martyrs were beatified, the greatest place was given to Fisher.