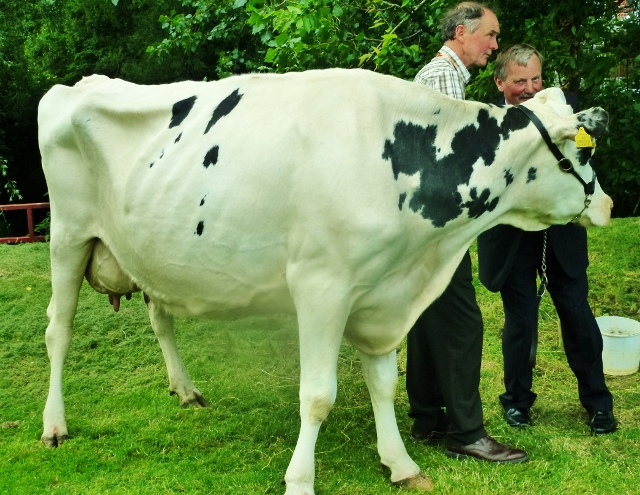 Meet Caislean Oman Rose. Her owner standing alongside her is County Dublin dairy farmer John Murphy, from High Down Hill in Newcastle (wearing a check shirt). He comes originally from Kerry. John is a member of the Irish Holstein Friesian Association and milks a herd of forty. The milk which was once supplied to Premier Dairies in Rathfarnham (Dublin’s last remaining dairy until 1997) now goes to Glanbia (formerly Avonmore Waterford) and is taken by tanker to Ballitore in County Kildare for processing.

Four months ago some members of the Irish Farmers’ Association held a protest at the Ballitore plant over the price being paid to dairy farmers for their milk. I do not know whether John was among them. But the price paid to suppliers is just one of the problems a small farmer has to contend with, another being the weather and the resultant fodder shortage.

Caislean Oman Rose was brought in for a photocall at the Diageo plant at Nangor Road Clondalkin in Dublin to launch the Bailey’s Champion Cow competition 2013, which will be held at the Virginia Show in County Cavan on Wednesday 21st August, four days after the Tydavnet Show in North Monaghan. This is the thirtieth anniversary and a special cake was produced to mark the occasion.

Last year the top prizes went to Ridge­field Dundee Portea, owned by Pat & Derek Fraw­ley, from Croagh in County Limerick. At the presentation of prizes by the late Shane McEntee TD, Minister of State for Agriculture, the Glan­bia Chair­man Liam Her­lihy said “these top Irish cows are pro­duc­ing milk for Bai­leys which ends up all over the world, so this com­pe­ti­tion is an excel­lent show­case for our dairy produce.” 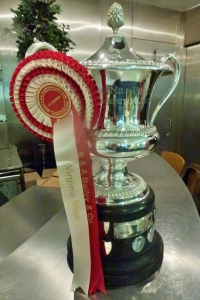 The first winners of the perpetual trophy in 1983 were the Crawford brothers from County Fermanagh. Farmers from Northern Ireland are still keen to compete at Virginia, but the restrictions on cross-border movements of cattle mean that they have to have passed TB and brucellosis tests thirty days before they are allowed into the Republic. The strict regulations are set out in the information about the Charleville Show in County Cork, which is on next weekend (29th/30th June).  This requirement however means that the Northerners might not be in a position to send their cattle southwards, if their own shows (Antrim Agricultural Show on July 27th was one example) take place around the same time as another show in the Republic, as the Vice Chair of Holstein NI Gaston Wallace pointed out.