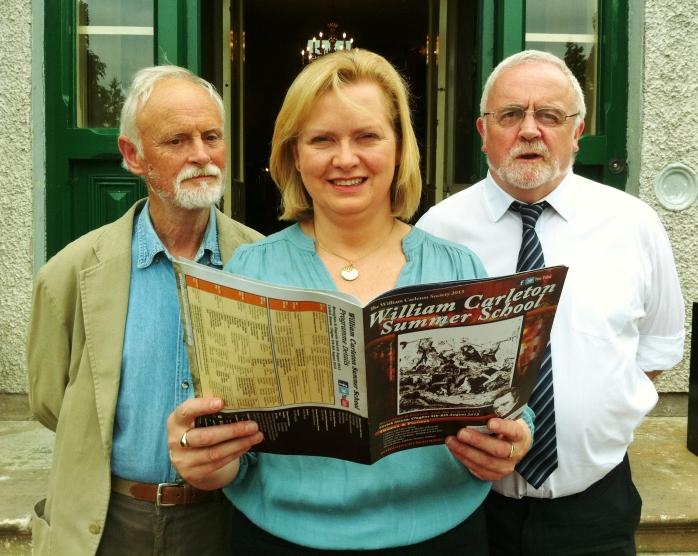 Tom McGurk returns to his Tyrone roots to appear at what promises to be one of the liveliest William Carleton summer school programmes in Clogher next month. It will include three nights of music of various types, including a session by a young female Irish traditional group Síoda.

Tom McGurk returns to his roots

A native of Brockagh near the shore of Lough Neagh, Tom McGurk is one of the most distinguished journalists and broadcasters in Ireland. He will be in conversation with Aidan Fee (like him, a past pupil of St Patrick’s College Armagh) on the subject of ‘Northern Ireland, Past and Present’ on the opening day of the school at Corick House Hotel on Monday 5th August at 4:30pm. As a student at Queen’s University Belfast, he was active in the civil rights campaign in 1968 and was involved with the People’s Democracy group.

Tom’s RTE television credits include presenting programmes like ‘Tangents’, ‘Last House’, ‘Folio’ and he currently anchors major RTE sports coverage especially rugby. He played rugby for Ulster. In Britain, he fronted ‘Granada Reports’ and reported for ‘Channel 4 News’ and ‘Newsnight’ on BBC2. In the late 1980s he was Foreign Correspondent with ‘The Mail On Sunday’ (London) reporting from Latin America, Africa and the USA and he covered the end of the ‘Cold War’ in Europe.

His extensive radio credits include presenting ‘Start the Week’ on BBC Radio 4 and a wide variety of interview and current affairs programmes with RTE. His screen writing credits include the television dramas ‘Dear Sarah’ (Thames TV/RTE) and ‘The Need to Know’ (BBC TV). He is also a poet and is a columnist with The Sunday Business Post in Dublin.

Síoda will perform at the Rathmore Bar, Main street Clogher (opposite the Cathedral) at 8pm on Monday 5th August. Admission free. They are a young and vibrant Irish traditional band. They have been making waves on the traditional music scene throughout Ireland for the last year. The band is comprised of Emma Robinson on flute, whistles and vocals, Joanna Boyle on banjo, guitar and vocals, Alana Flynn on bodhran, vocals and dancing, Rosie Ferguson on fiddle, vocals and dancing and the only male in the line-up Conor Murphy on guitar and vocals. Coupled with the singing and playing, the band contains an all Ireland champion Irish Dancer, creating an all-round exhibition of Irish culture. The band have featured on numerous radio and television programmes, including BBC Radio Ulster’s ‘Blas Ceoil’, UTV, U105 and TG4’s ‘Geantrai’. Síoda will be joined by well-lnown singer and broadcaster Seosaimhín Ní Bheaglaoich.

Wednesday 7th August will be an opportunity to meet the two Marys….Mary O’Rourke and Mary Kenny. Both will be speaking on a day devoted mainly to dealing with the past. From the sectarianism of Carleton’s time in the Clogher Valley of the early 19th Century up to modern Ireland. The first topic that day (7th) will be the Orange Order. Politics Professor Jon Tonge from Liverpool University is an expert on the subject, author of a book on Orangeism and Britishness. Commentators Alex Kane and Dr Margaret O’Callaghan will be contributing to a discussion afterwards.

Former Fianna Fáil Minister Mary O’Rourke will talk about her Memoir concerning her life as a politician and how different political strands can be accommodated. Another guest is Dublin-born poet Siobhan Campbell, currently working with US Army veterans to set down their experiences in writing. The closing sessions will be devoted to the Carson story, the great unionist leader. Actor and playwright Paddy Scully will present extracts from his one-man show ‘Lord Edward Carson Reflects’. Author and playwright Mary Kenny will talk about ‘Carson, Irishman, Unionist and Dubliner’.

The international aspect of the summer school will be reinstated with the presence of Professor Thomas O’Grady, Director of Irish Studies at the University of Massachusetts in Boston. He will talk about Carleton’s story ‘The Donagh’ on Monday 5th August. Honorary Director, Professor Owen Dudley Edwards, will give a talk on Carleton, Irish Literature and Caesar Otway, the Protestant clergyman who influenced Carleton to convert to the Anglican church in order to get his writings published.

The question of language will be discussed on Tuesday 6th August. Dr Ciaran Mac Murchaidh, St Patrick’s Drumcondra, will speak about the use of Irish in the Clogher Valley in the era of Carleton’s youth. Dr Ian Adamson from Belfast will present a paper on Ulster Scots. The William Carleton Society President Jack Johnston will talk about Augher from the time of plantation landlord Sir Thomas Ridgeway to George Duffy, the Miller. The Miller’s daughter, Anne Duffy, Carleton’s earliest love, is the subject of a story by Josephine Treanor, who is related to her.

In a session devoted to literature, four writers will discuss their works:  Ciaran Collins from Kinsale, Co.Cork, ‘The Gamal’, Patricia Craig from Belfast, ‘Twisted Root’, Anthony Quinn from Tyrone,’Disappeared’ and Tony Bailie from Co.Down, ‘A Verse to Murder’.

There will be entertainment each evening, including a concert at Fivemiletown Wesleyan Hall, opposite the creamery, at 8pm on Wednesday 7th August. Murley Silver Band, a local group, will be joined by Monaghan Gospel Choir, with a star guest, Gloria, famous for her recording of ‘One Day at a Time’. The previous evening (Tuesday 6th) at 8:30pm at Somers cafe, Fardross (Clogher Valley Caravan Park), the sound of bagpipers Jim Brady and Frank Gildernew along with the young pipes and drums Ulster Scots group will mix with the sound of Irish traditional musicians, the McKenna family from Clogher. The Clogher Valley ramblers have also organised a Carleton walk to finish at Fardross in time for the entertainment (departing Corick House 7pm for summer school participants). All evening events are FREE and are part-funded by the EU’s PEACE III Programme for PEACE and Reconciliation through the ‘Shared History Shared Future’ Project administered by Dungannon and South Tyrone Borough Council.

On Thursday 8th there will be a literary tour to Fermanagh including the Crom estate and Enniskillen. Cost £30 to include snack, light lunch and evening meal. Departing Corick House 10am sharp. Bookable via tour guide Frank McHugh e: f.mchugh4@btinternet.com.