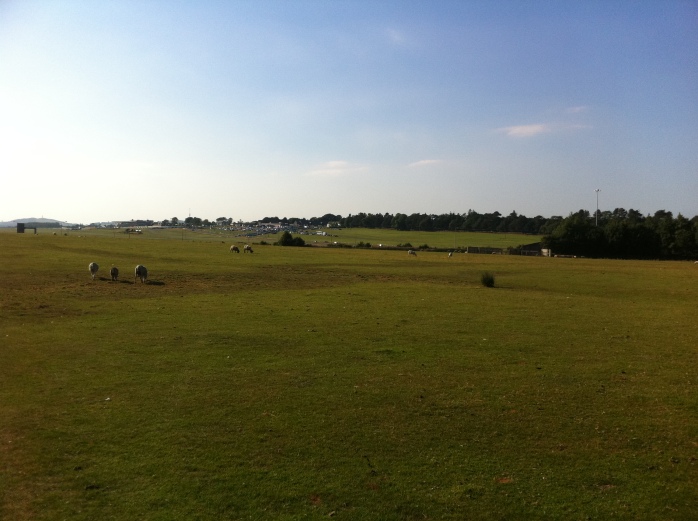 The Curragh of Kildare. Racecourse in background.

Travelling to Kildare to watch the Lilywhites take on the Red Hands from Tyrone, my route to Newbridge took me past the Curragh. As I approached the town on the motorway, I listened to RTÉ Radio sports coverage and discovered there was a meeting on at The Curragh. I heard the commentary on the 5:40 race (Invesco Pension Consultants Minstrel Stakes) which was won by the 8/11 favourite Darwin, ridden by JP O’Brien.

By the time I reached the entrance to the Curragh military camp, the racegoers were preparing for the main event, the Darley Irish Oaks. So I stopped to look over towards the main stand and I could see that there was a good crowd, judging by the number of cars. For the record, the 6:15 race was won by Johnny Murtagh on Chicquita, at a price of 9/2. A stewards’ inquiry was called after the half-length success but the placings remained unaltered. 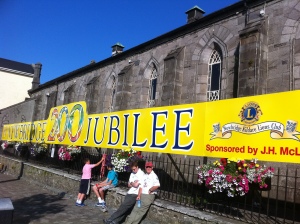 On then to Newbridge and my first job was to locate the GAA pitch. It couldn’t have been easier. I observed a crowd of Kildare supporters walking down the Main Street and saw them going up a lane beside the Town Hall (an old garrison church), where there was a big banner for Newbridge 200, a bicentenary celebration that started last September and will  become the Newbridge Grassroots Festival. The local Newbridge Kildare Lions Club logo was prominent: well done, fellow Lions.

Parking was found at a nearby private car park at a rate of €1  an hour, which was very reasonable. It took five minutes to walk to the ground. The pubs and shops seemed to be benefitting from the influx of trade. So please, no more sports arenas perched in the middle of nowhere on a ring road or beside a motorway.

The crowd was just under 7500 and they managed to enter and exit without any great problems.