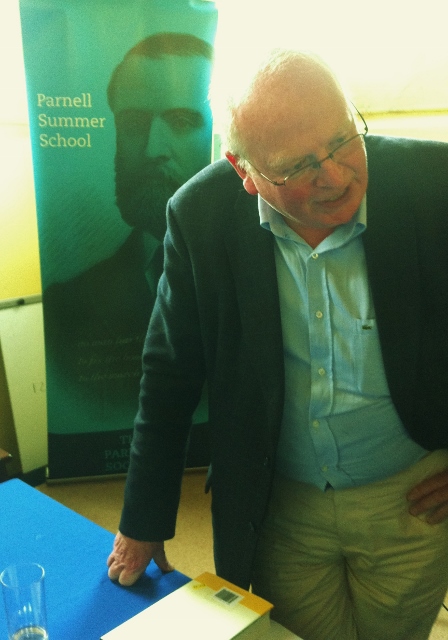 I have known Michael McDowell for over 45 years since we went to school together when I returned to Dublin from Wimbledon in 1967. Peter Mathews TD was in the same year and the three of us along with half a dozen or so more classmates joined the FCÁ together, but only a few completed a five year term, including some full-time duties with the army. I have seen therefore at first hand how much Michael believes in the concept of service to the state and loyalty to the nation.

Update: Since writing this the sad news has emerged of the death of one of our classmates, High Court Judge Kevin Feeney, who was a keen tennis player and had served in the same FCÁ unit I referred to. May he rest in peace. Michael McDowell had earlier told me about the recent death of another well-known Dublin lawyer who served with us in the Military Police, James Gilhooly SC. My sympathy goes to both families. 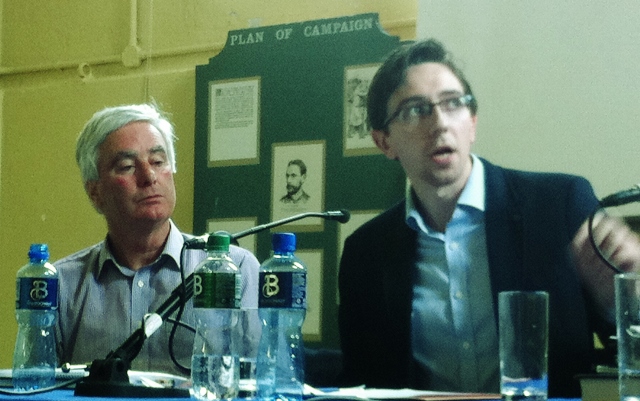 It was therefore very interesting to hear him speak at Avondale House at the Parnell Summer School alongside the Wicklow/Carlow East  TD Simon Harris (from Michael’s former party Fine Gael, which I recall he joined at UCD) and Stephen Collins, Political Editor of the Irish Times, on the subject of public service. My former RTÉ News colleague Bryan Dobson chaired the session. This is how the Irish Times is reporting his speech:-

The former Justice Minister told the summer school Ireland was not a “failed state” and its people should not accept phoney reform in abolishing the Seanad. Addressing the theme ‘Parnell & Kennedy: Lost Leaders’ this afternoon, and taking a cue from JF Kennedy’s dictum; “Ask not what your country can do for you, ask what you can do for your country”, Mr Mc Dowell called for a new sense of patriotism and loyalty to the Constitution. He said some commentators seemed to enjoy wallowing in what he termed as a ‘middle-class self-hatred’ or negativity. “It is easy to be critical; it is hard to be constructive, especially during times of economic crisis,” he said.

He recalled the 1998 amendment to the Constitution which he said redefined the nation as one which aspires to include all the people of Ireland, “in all the diversities of their identities and traditions”. “Those words are important” he said, arguing that the State had opened up its sense of patriotism and republicanism “to build and develop on this island a republican State which is not mainly or exclusively Catholic, but is open to all traditions and identities”. But he said “a particularly striking historical nonsense” was the belief by the “post-Marxist left” that republicanism equated with socialism, and a failure to deliver on socialism was a betrayal of the Republic. “The two ideals are not equivalents” he said.

Mr McDowell said proposals for reform may be worthy and legitimate only if they were motivated by a desire for improvement in the way the State functions. But he said the proposals to abolish the Seanad based on cost were “threadbare and illegitimate”. He said the actual cost of the Seanad was about €1.60 per year for each citizen and “abolitionists” wanted to postpone any supposed savings for three years – spending €14 million now on a referendum to achieve “small savings” in three years, he argued.

“Do we really want now to slam the door shut on non-TD expert participants in Government such as [former minister] James Dooge?” he asked. “Do we also want to turn down the possibility of having Northern voices such as Gordon Wilson or Seamus Mallon, or people such as Mary Robinson and Ken Whitaker in our parliament?” He suggested abolition of the Seanad was “a crude attempt to ride the wave of public disillusionment with phony reform based on phony cost arguments”.

Mr McDowell said he believed loyalty to the State involved a duty on every citizen to participate and be responsible in shaping the democratic process, but “corrosive cynicism about politics” damaged democracy. “Our commentariat, in the last analysis, must acknowledge that we as citizens choose our politicians” he said, adding that politicians were not the enemy. “Politics is the process that we as citizens choose it to be. We should not cannibalise the Constitution in the name of reform,” he said.