Monaghan Gospel Choir under the direction of David Drum brought to an end one of the most successful summer schools ever held by the William Carleton Society with a concert at Fivemiletown Wesleyan Hall. The Choir sang some of their favourite numbers including ‘By the Rivers of Babylon’ and ‘How Great Thou Art’. But the big hit of the night was the guest appearance by Gloria from Tydavnet. She sang with them the song which gave her a number one hit in 1978, ‘One Day at a Time’, before going on to delight the crowd with several other songs. There was a rousing finale when the Murley Silver Band directed by William Hill returned to the stage to accompany the Choir in two songs, bringing an end to a most enjoyable night.

The previous night members of the Clogher Valley Walking Club led a group of ramblers on part of the Carleton trail in the area of Fardross forest. The route passed by an old Mass rock, thought to date back to penal times. The walkers were met by two pipers, Jim Brady and Frank Gildernew as they arrived back at Somers cafe. The Ulster Scots juvenile pipe band also played for the guests and inside the cafe the McKenna family from Clogher provided traditional music.

On the Monday night at the Rathmore Bar in Clogher there was a music session with a new traditional group called SÍoda, one of whom is from Emyvale. They were joined at one stage by SeosamhÍn Ní Bheaglaioch from Dublin, a sean-nós singer and well-known broadcaster who sang a number of songs in Irish. On Sunday, she sang unaccompanied during a ceremony at the Blue Bridge at Inishdevlin, Emyvale. Summer school events in Emyvale and Monaghan were part-financed by the European Regional Development Fund through the PEACE III Programme managed by the Special EU Programmes Body and delivered through the Monaghan PEACE III Partnership.

The summer school director Michael Fisher unveiled a plaque which had been restored with the help of local craftsmen by Emyvale Development Association. In 1997, Monaghan County Council in conjunction with the Association erected a Plaque there but weather conditions eventually rotted the  plaque backing and it came away from the wall. The programme began at 4pm in Emyvale Leisure Centre with light refreshments and then a move to the Blue Bridge. Some walked while transport was laid on for the remainder. At the Bridge Peadar McMahon, chairman Emyvale Development Association,  began proceedings giving some background and then introduced entertainment from the Murphy family of Jack, Chloe and Lauren playing traditional music, Seosamhín Ní Bheaglaioch, and Edelle McMahon singing the ‘Romance of the Merrow Queen’, which has local connections.

Michael Fisher then addressed the crowd and spoke about Carleton and also about another great poet and writer, Terence O’Gorman, whose works have just been launched in book form by his daughter, Patricia Cavanagh. He read a poem about Emyvale, written by Terence and contained in the book. He thanked the Bowe family and Seamus McAree for their part in the preparations for this event and then unveiled the restored Plaque. Seamus McCluskey then added some historical notes and interesting facts about the Blue Bridge, Carleton and the area in general. Finally Peadar McMahon thanked those who assisted – Truwood; Connolly Furniture; Murphy Sound and Video; The Murphy family musicians; Seosamhín and Edelle; Richard McCarron (local stonemason who, with Declan McMahon, erected the plaque and advised on stonework); the Photographers; Moran’s Transport; Norah Ryan; Jim Balfe and Paddy Sherry; George McCarron; Emyvale Leisure Centre Committee; The Emyvale Development Committee and all who attended; There was special thanks to Paul and Ann Bowe for their assistance and support, which was greatly appreciated. He then invited all to return to the Leisure Centre for a reading by the Carleton Players of the ‘Fair of Emyvale’, adapted by Liam Foley. On Saturday, around sixty people took part in a walking tour of Monaghan town led by Grace Moloney of the Clogher Historical Society and Theresa Loftus from Monaghan County Museum.

For the first time, the summer school had opened in Monaghan, with a conference on William Carleton, Patrick Kavanagh and Charles Gavan Duffy. Art Agnew from Carrickmacross who grew up in Inniskeen put in a lively performance as Kavanagh, delivering extracts from ‘The Green Fool’ and other works. International guest Professor Thomas O’Grady from Boston read some of his own poetry, including verses about Prince Edward Island, where he was born. He also talked about Kavanagh and Benedict Kiely. Earlier the summer school was officially opened by the Mayor of Monaghan Cllr Sean Conlon, who was accompanied by the Mayor of Dungannon and South Tyrone, Cllr Sean McGuigan. Mary O’Donnell who comes originally from Monaghan and is a patron of the William Carleton Society read some of her poems. Dr Brendan O Cathaoir and former Monaghan Museum curator Aidan Walsh spoke about Charles Gavan Duffy, while the final talk was given by Felix Larkin, director of the Parnell summer school in Avoca, on the Shemus Cartoons in the ‘Freeman’s Journal’.

The proceedings switched to Clogher on the Monday, in the presence of the Bishops of Clogher Right Reverend John McDowell and Dr Liam MacDaid, and Bishop Emeritus Dr Joseph Duffy, a patron of the William Carleton Society. Among the speakers were Professor O’Grady, Professor Owen Dudley Edwards, honorary director of the summer school, and the television presenter and commentator Tom McGurk, who spoke about his upbringing in Brockagh, County Tyrone.

This part of the summer school is supported by the Office of First Minister and Deputy First Minister and funded through  Dungannon and South Tyrone Borough Council under the District Council Good Relations Programme and the William Carleton Society committee gratefully acknowledges this funding.

Wednesday’s session attracted national headlines with the speech of Mary O’Rourke about a proposed grand coalition between Fianna Fail and Fine Gael. There was also an interesting session on the current state of the Orange Order by Professor Jon Tonge from Liverpool. The audience included former Police Ombudsman in the North Dame Nuala O’Loan and her husband Declan, an SDLP Councillor in Ballymena.

Mary Kenny’s talk on Edward Carson, Dubliner, Irishman and Unionist was well received and provided a fitting end to the formal part of the summer school. The seventh day was devoted to a literary tour of Fermanagh, led by Gordon Brand (Secretary, William Carleton Society) and Frank McHugh, deputy director of the summer school. The tour headed to the Crom estate near Newtownbutler on Upper Lough Erne, where our guide was Vicky Herbert from Lisnaskea. She took the group on a walk to the old Crom Castle and past the famous yew trees, some of the oldest in Ireland. She also pointed out the house where the author Shan Bullock had lived as a child. His book ‘The Loughsiders’ is based around Crom and the neighbouring villages. 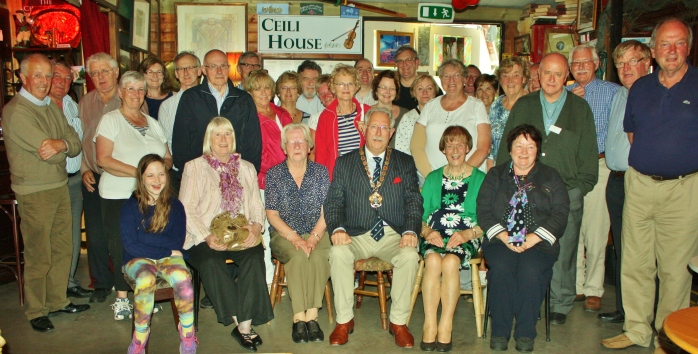 The Wiiliam Carleton summer school was brought to a successful end with a literary tour of Fermanagh, finishing with a visit to the Ceili House near Enniskillen. Host Tom McGowan has assembled a range of unusual objects from road signs to old rowing boats and oars to radios. The group led by summer school director Michael Fisher was met by the Chair of Fermanagh District Council, Alex Baird.

The day finished with a visit to the Ceili House, a private establishment run by Tom McGowan outside Enniskillen. Based in a former quarry, it includes a vast collection of memorabilia including old radios, road signs and rowing boats and oars. The group met the Chair of Fermanagh District Council, Alex Baird and after a pleasant dinner, returned to Corick House to round off a hectic week of engagements.