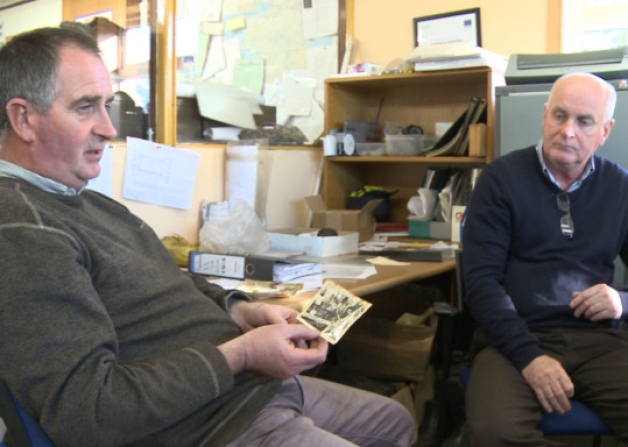 A South Tyrone filmmaker has helped to uncover five treasure troves of the area’s hidden history, including the story of how the achievements of two Killeeshil inventors changed the global quarry industry. Over the summer, cameraman Kevin McSorley captured the activities of history buffs from Caledon Regeneration Partnership, Donaghmore Historical Society, Killeeshil and Clonaneese Historical Society, South Lough Neagh Historical Society and the William Carleton Society.

His film was funded by the European Union’s PEACE III programme for PEACE and reconciliation through the ‘Shared History, Shared Future’ project, administered by Dungannon and South Tyrone Borough Council. It reveals the extraordinary story of how two men from Killeeshil, John Finlay and Sylvester Mallon, changed the course of the quarry engineering industry with inventions that are now used around the world. It also features a celebration of the legacy of literary genius William Carleton, born in the Clogher Valley, as well as the history of the Ulster Canal, and South Tyrone’s industrial heritage.

The film shows footage of Finlay and Mallon’s relatives describing the humble origins of both men, and how they were constantly dreaming up new inventions and enterprises on the backs of cigarette packets. The pair, who had great respect for each other, went on to set up factories and companies that employed large numbers of local people, and created the foundations for Tyrone’s world-class engineering industry. Nowadays, approximately 68 percent of the world’s mobile crushing machines is manufactured in the county.

The project was launched at Ranfurly House in February by the Mayor of Dungannon and South Tyrone. Dr Brian Lambkin, Director of The Ulster American Folk Park in Omagh, was the guest speaker. In June all five groups were represented at Caledon Courthouse during a visit by the Their Royal Highnesses the Prince of Wales and Duchess of Cornwall to see the work of Caledon Regeneration Partnership. The five historical societies shared with each other an awareness of their own fields of expertise and used it towards a shared understanding of our history and future.

Caledon Regeneration Partnership, formed in 1996, is a not for profit company whose make-up was and continues to be four community representatives, four Dungannon and South Tyrone Borough Councillors and three representatives from Caledon Estates Company. In 1997 the Partnership obtained funding from PEACE 1 for the development of a Comprehensive Development Plan for Caledon village. The group has helped to regenerate much of the village including many historically important at-risk buildings, such as Mill Street cottages and the beam engine house at the former mill. Caledon Regeneration Partnership is actively involved in community building initiatives.

Donaghmore Historical Society was formed by a small group of people in 1983 and since then its numbers have swollen. It refurbished what was the National School and is now the Heritage Centre. It built a replica of the Donaghmore High Cross, put Donaghmore Living History on the worldwide web and has, in conjunction with the Heritage Centre, amassed the largest archive of townlands research material in Ireland. Plans are being made to digitize the entire archive and bring townlands research into the 21st century at the touch of a button by providing access to data, using the DHS website.

Killeeshil and Clonaneese Historical Society encourages its membership to take ownership, research, interpret and be informed of the shared history of the area. It is rich in industrial heritage, including the development of machinery for quarry engineering.

South Lough Neagh Historical Society is based on the south shore of Lough Neagh. It is an academically- based society, drawing support from the wider community in their continued search to examine and record the historical and cultural footprint of this diverse area. The project examining the past, present and future of the old Ulster Canal has proved to be both illuminating and beneficial to all the members who participated and their findings are another marker in the history of this old waterway.

The William Carleton Society was re-formed in 2011 and is a cross-community, cross-border group dedicated to promoting the works of the well-known Irish author from County Tyrone and his life and times. It seeks to use his stories of faction-fighting and sectarianism in 19th century Ireland as the basis for talks and discussions on history and literature and the lessons for modern-day society. Since 1992 it has run an annual summer school in the Clogher area, with leading authors, poets and historians among the contributors.

All five groups have contributed to a 100-page booklet, which was published on November at a reception at Ranfurly House in Dungannon on November 19th. The publication printed by Ecclesville Printing Services in Fintona was also funded through the PEACE III project and copies costing £5 will be available from the individual societies from next week. Arcella Films produced the hour-long DVD. For more information and any permission to publish the video pictures contact Kevin McSorley in Cabragh, Dungannon or email the societies. Copyright 2013.

The above article is based on a news release I wrote for the Shared History, Shared Future project and was published in the Tyrone Times on November 22nd.