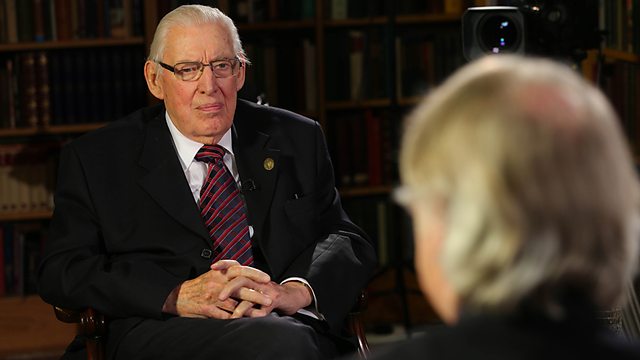 Ouch! Looks like the DUP handlers have been working overtime to get their retaliation in first, in advance of the broadcasting of the second part of Eamonn Mallie’s interview and documentary featuring the former DUP leader and former Free Presbyterian Moderator Lord Bannside. Worth remembering that Ian Paisley is now 87, as one of the party’s responses remind us.

Statement from Democratic Unionist Party Spokesman: “Lord Bannside is entitled to his own opinions – however, he is not entitled to his own facts. The Party deeply appreciates the contribution Lord Bannside made to Northern Ireland and to the growth of the DUP.  Despite the headlines regarding these programmes, the Party will not be losing focus. Our greatest ever electoral victory, in 2011, gave us a mandate to keep Northern Ireland moving forward. We will get on with that task.

We are saddened to see Lord Bannside harm his own legacy.  In his later years as Party leader, many colleagues shielded his frailty from public view, to avoid embarrassment and protect his legacy.  Those people are hurt by untrue and bitter comments contained in the documentary.

The party, unlike the media, has not been granted an advance viewing, however, the programme maker and the BBC have already been informed of the inaccuracy of those claims made in the programme about which they have notified us. The Party does not intend to respond to the personal opinions expressed in the programme – those making the comments must take responsibility for them – but it will not let untrue assertions dressed up as facts go unchallenged.

Dr Paisley, as he was then known, gave a number of interviews on the occasion of his retirement announcement.  In those interviews he stated that he had been considering his retirement for some time and had himself chosen the time to stand down.  Moreover he denied that he had been “pushed”.  The public may well ask whether then or now they have been misled. Worse, he now seeks to place the responsibility for his decision on those who protected him most when, at 82 years of age, his ability to perform his duties was seriously diminished and causing widespread concern.

Contrary to media speculation, the party has not mounted any form of legal challenge to this programme. When the Party sees the second programme, rather than relying on third party accounts, it will decide if any further response is necessary.”

“There are many who will believe that in agreeing to participate in these interviews Lord Bannside will have done nothing to enhance his legacy. They will struggle to reconcile the spirit and tone he presents with that which they will have known and admired.  This is not the Ian Paisley we knew.

As someone who faithfully served Dr Paisley for many decades I will make one final sacrifice by not responding and causing any further damage to his legacy beyond that which he has done himself.  Rather than return insult for insult, let me bless him with the mercy of my silence and wish him well.”

“I am personally very saddened to learn of the tone and contents of the latest programme on Lord Bannside.   All of us who worked hard for him and with him for many years wished only the best for him and for our country. It is to be deeply regretted that at 87 and retired that this programme may be what is remembered about him rather than the good things that he did.

Clearly the passage of time has diminished accurate recall of events.   What is being said now by Lord Bannside about meetings is inaccurate and stands in stark contrast to everything that he said and did at the time and, indeed, during the years since.  As Lord Bannside is not long out of hospital I wish him well in his recovery.”

“I have served as Chairman of the DUP for most of the period discussed in the programmes. During that time, I have some great memories of Dr Paisley.  I am saddened by this turn of events.  Throughout my political lifetime I was a loyal friend to Lord Bannside.  I wish him well in his recovery.  These latest utterances do not do justice to someone who was a giant in unionism in Northern Ireland.”

“I am deeply saddened to learn of the general content and tone of the Ian Paisley programme to be broadcast by the BBC on Monday evening. After a long and distinguished career it is very regrettable that Dr Paisley, as well as Mrs Paisley, and those who now advise them, have co-operated in the making of two programmes that have significantly and irreversibly damaged his historical legacy.  Unsurprisingly the events of that time have not been accurately recalled and indeed the “research” used by the production staff is wrong in many significant respects.  Some of the programme content is simply untrue.

I totally refute any allegation, suggestion or implication that a survey conducted was “framed” by me or anyone else.  Dr Paisley commissioned the survey and was aware of its nature and its findings at the time.  At no point then or since has Dr Paisley or Mrs Paisley sought to raise these concerns with me despite having had every opportunity to do so.

I learned many valuable lessons while working for Dr Paisley, one of which was not to discuss internal party business in public.  I have no intention of departing from the advice he proffered at the height of his career.  While saddened by this turn of events I wish Dr Paisley well for the future.”

Whatever about the reaction from the politicians, it was interesting that the final quote came from Timothy Johnston, former special advisor to Ian Paisley when the DUP leader became First Minister in a power-sharing Exective with Sinn Féin, along with UUP and SDLP representatives in May 2007.

So there you have it. It just remains to see what exactly Ian Paisley has to say for himself at 10:35pm on BBC1 Northern Ireland. Paisley: Genesis to Revelation. Episode 2. Ian Paisley has been one of the most controversial political figures of the 20th century. From firebrand preacher to hard line politician and ultimately Northern Ireland’s first minister, he has lived a life in the public eye.

In this two-part series, Eamonn Mallie challenges Ian Paisley on his role in Northern Ireland’s troubled past and reveals the dramatic circumstances of his departure from politics and public life. Expect to hear Eamonn on a number of radio current affairs programmes this morning talking about the programme.

According to the Irish News front page, Ian Paisley is claiming that the DUP betrayed him and he alleges that senior party figures plotted his downfall as leader.