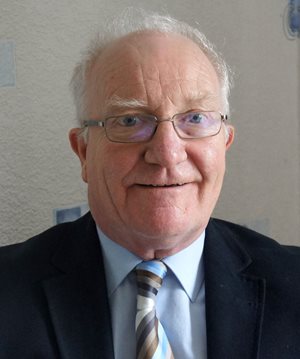 The 64-year-old was nominated by twelve presbyteries including Monaghan out of the nineteen that met this evening (Tuesday) across Ireland to select a successor to the current Moderator, Reverend Michael Barry. Known as the Moderator-Designate, Mr McNie will officially take up office as Moderator at the start of the Church’s General Assembly on Monday 1st June.

Speaking about his nomination, Mr McNie said, “I am greatly humbled that so many of my colleagues in the ministry, and many ruling elders, within the various presbyteries have felt they could entrust me with this important responsibility within the Church.

Throughout my ministry I have sought to preach the Gospel with clarity and conviction, in such a way that people will be moved by the God’s Spirit to make a positive response to become Christians.

With God’s help and the prayer support of the Church, I would trust that during my year in office, lives would be impacted with the Gospel”, Mr McNie said.

Ian McNie will be the 176th Moderator since the election of the Very Rev. Dr. Samuel Hanna in 1840. Describing himself as a ‘conservative evangelical’, he also sees his ministry substantially as a parish ministry, confining himself to work within the congregation and district.

“As a conservative evangelical, I recognise that we are living in the 21st Century and therefore seek to steer the congregation in such a way that we do not cling to the traditions of the past, but seek to be relevant today. At the same time, I also recognise that the truth of the Gospel has not changed and we should not allow society to pressure us into departing from the core values of the Scriptures.”

The ministry of the County Antrim congregation is wide reaching with a daily community playgroup, weekly mums and toddlers group, senior citizens bowling afternoon and a group for adults with special needs. The Church also works with a range of local youth organisations, conducts weekly services in various care homes and sends teams to Malawi to support the work of missionaries in the south-eastern African nation.

Born in 1950, he is married to Anne and has two sons, one of whom, Stephen, is the Minister of Ballyalbany and Glennan Presbyterian Churches in County Monaghan. Mr McNie was brought up in Antrim and attended First Antrim Presbyterian Church, becoming a Christian at the age of 13. Having attended Belfast Royal Academy, he went on to Queen’s University, Belfast graduating with a Bachelor of Divinity.

As a teenager Mr McNie wanted to become a teacher, but felt God’s call to the ministry, a step he says he has never regretted. Having attended Union Theological College, he was ordained as Assistant Minister at Alexandra Presbyterian Church, Belfast in 1978 before being installed in 1980 at Kilkeel Presbyterian Church in County Down. He became Minister at Trinity in 1991.

As well as family life – he will become a grandfather for the first time later this month – Mr McNie enjoys running and walking and takes an interest in the projects his church supports in Malawi, having visited the country on many occasions.

Reflecting on the General Assembly’s theme for 2015 ‘A caring fellowship’ Mr McNie said: “Throughout my ministry I have sought to preach the Gospel in such a way that people will be moved by the Spirit to make a positive response to become disciples of Jesus Christ. The Church today is God’s answer to both the fundamental needs of the individual and society. We need to look beyond ourselves and re-examine the ways in which we include those who are often considered outsiders and become enriched by them.”

“During my year of office I would hope to be given the opportunity to present the Gospel in many different situations, both within the church and community, to learn from the experiences of others and to encourage congregations to be proactive in their presentation of the Word of God. I would also look forward to the opportunity to encourage ministers and their families, particularly those who have just started their ministry”, he said.