Councillors in South Monaghan are arranging an urgent meeting with the Chief Executive of Monaghan County Council to discuss what one of them said was the “absolute scandal” of the roads budget for the coming year. Municipal District members from Carrickmacross-Castleblayney expect to meet Eugene Cummins at their Roads Area Meeting in Monaghan on Monday afternoon, following a meeting of the County Council.

Councillor PJ O’Hanlon said they seemed to be going back to a budget that was as bad as fifteen years ago. It was one of the most important issues that had arisen since the new Council was introduced last year. The Councillors called for a meeting next week with the five Dáil deputies in the constituency, including the Arts Minister, and for a follow-up meeting to be arranged with the Minister for Transport, Tourism and Sport, Paschal Donohoe. Councillor Colm Carthy proposed and his party colleague Councillor Noel Keelan seconded a motion that the Municipal District should write to the Taoiseach and to the Transport Minister to request extra funding for roads in the constituency, in order to upgrade roads that are in serious disrepair. In addition the members called on local Oireachtas members to push this issue with the Departments involved. The motion was agreed. 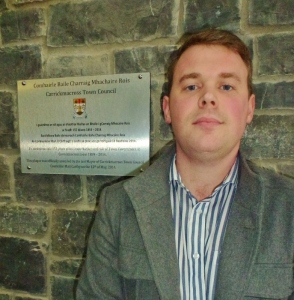 Councillor Colm Carthy referred to what he said was the ridiculous situation whereby Bus Eireann was refusing to allow a school bus service to drive along certain local roads because of their bad condition. He said the state of the roads was the top issue being referred to him regularly by members of the public.

Councillor O’Hanlon also referred to the withdrawal by Bus Eireann of a school bus service because of the bad state of repair of a local road. He proposed and Cllr Padraig McNally seconded a call for the Council to write to Bus Eireann and the Transport Minister to say that under no circumstances should a school bus and service bus be taken off the road due to the bad condition of the road without first notifying the relevant authority, i.e. County Council, and that a period of four weeks be given for the works to be done. This was passed unanimously.

Fianna Fáil Councillor PJ O’Hanlon claimed the Fine Gael-led government seemed to have no interest in the maintenance of roads in the county. They needed to sit down with the Transport Minister and ask him how they were expected to promote tourism on the one hand and on the other improve the roads in their area with the budget that had been allocated.