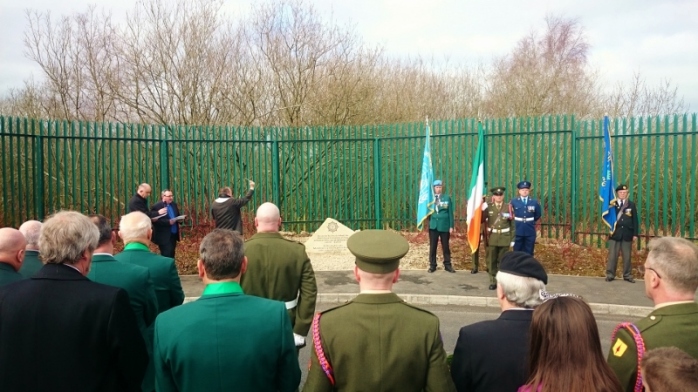 The tricolour was lowered for the last time at Monaghan Army Barracks in January 2009 and the gates were closed as the Defence Forces moved out. It was one of four army posts put up for sale by the government. Most of the soldiers based there transferred to the Headquarters of the 27th Infantry Battalion at Aiken Barracks in Dundalk.

It might have remained a derelict site for many years. But it has since been transformed into an Education Campus that includes a new Garage Theatre, as well as two schools and the Monaghan Institute. The complex which was developed by the Cavan Monaghan Education Board under its Chief Executive Martin O’Brien was officially opened last month by An Taoiseach Enda Kenny. 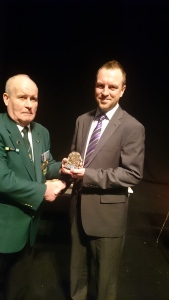 In order to remember the contribution of thousands of army personnel who passed through the post, a Monaghan Barracks Association was formed by a former Sergeant, Dennis Barry. A native of Clonmel in County Tipperary, he was stationed at the Armagh Road complex for many years. Their way of marking the contribution of the military and their colleagues from the Air Corps and Navy was to commission a stone from Emyvale sculptor Marc Kelly.

Last Saturday (March 21st) former army colleagues including UN veterans joined serving members of the 27th Infantry Battalion and the Reserve, along with their families and friends, at the unveiling of the stone. 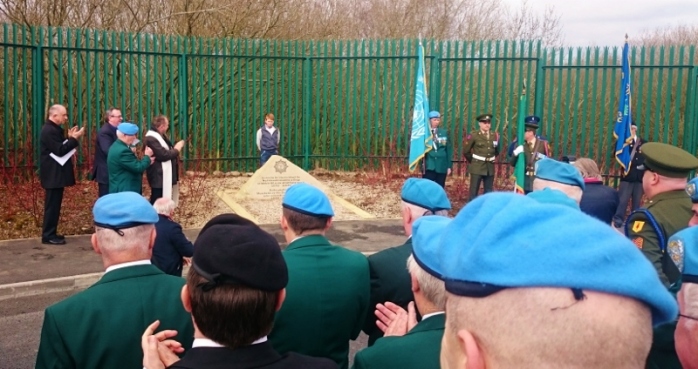 The honour of unveiling the stone was given to 10 year-old Nathan Healy from Cavancreevy, Castleshane. His father Private John Healy of the 27th Infantry Battalion came from Dublin and joined the army when he was 19. Private Healy died in October and was given military honours at his funeral in Monaghan.

Flags on the stage during the Mass Photo: © Michael Fisher

The memorial stone is dedicated to all members of the Defence Forces who served on the site 1976-2009.

At the start of the commemoration, a Mass was held in the Garage Theatre, celebrated by Fr McCay-Morrissey. He said when the announcement of the closure of the barracks came, it was unexpected. It was a time of anxiety and uncertainty for those affected. But good things had eventually emerged from it, although some were still adapting to the move to Dundalk. Prayers were said for all those who had worked in the barracks, the NCOs and officers and the staff.

Reflection during Mass by John Wilson, remembering all who had been stationed at Monaghan Barracks Photo: © Michael Fisher

Fr Seán McDermott was chaplain when the barracks closure was announced and recalls that he was with some members of the unit serving overseas at the time. 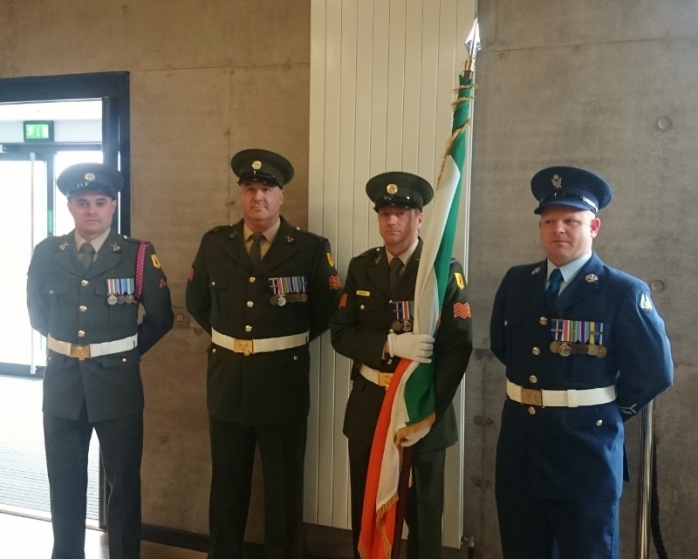 The decision to construct a barracks in Monaghan was made in November 1973 and the complex was opened in December 1976 by then Taoiseach Liam Cosgrave at the height of the troubles in the North. The soldiers who were then part of the 29th Infantry Battalion operated border patrols and served in aid of the civil power (Gardaí). They often found themselves called out to monitor unnapproved border crossings where local residents were filling in craters that had been caused by the British Army. The troops also supported the Department of Agriculture during the foot and mouth, BSE and poultry disease crises.

Not many local people signed up for military service initially, but as the years went by, more recruits came from the Monaghan area. Soldiers of the 27th Infantry Battalion have served in numerous peacekeeping missions around the world, most notably in Lebanon.

Colour party marches off at end of unveiling and blessing Photo: © Michael Fisher

UN veterans were among those who paraded from the Garage theatre to the site of the memorial stone in what was once the transport yard of the barracks. 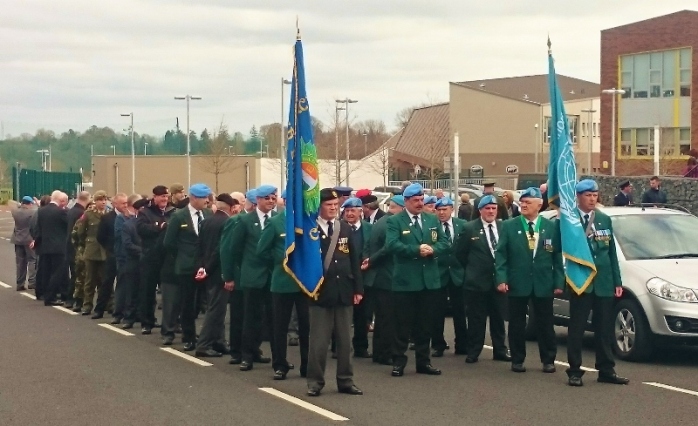 Following the ceremony, refreshments were served in the school canteen and young Nathan Healy from Castleshane was given the task of cutting the special cake that had been made for the occasion.