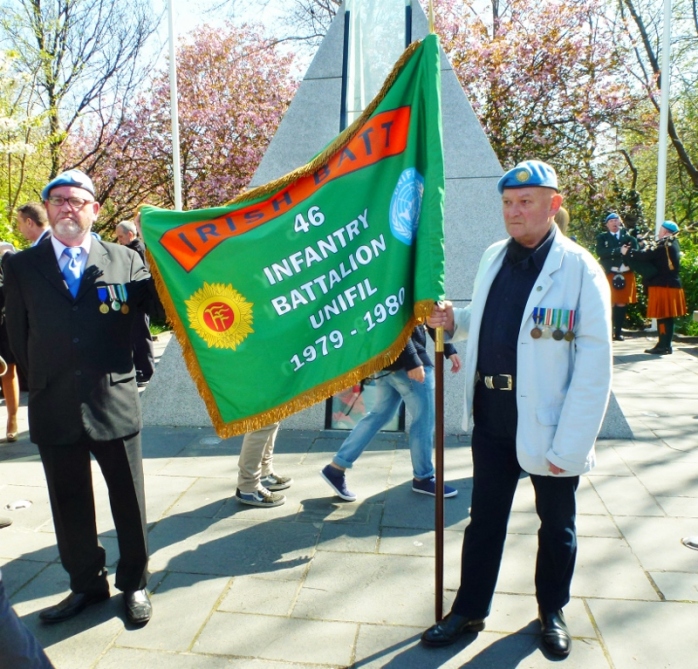 Paráid Aire! Paráid Lig Amach! The Irish UN veterans and ex-servicemen were on parade and the commands and the response to them (Parade: Attention! Parade: Fall Out!) were carried out with military precision and bearing. Pride of place in the parade at Merrion Square was given to members of the 46th Infantry Battalion. Wreaths were laid at the National Memorial to members of the Defence Forces who gave their lives in the service of the state. It was a very fitting end to the Smallhorne and Barrett campaign, which has now been stood down.

The pyramid shape of the memorial, which was designed by Brian King and opened in November 2008, captures references to burial and is a standing testament to the dead. It also reflects the shape of a military tent. Within the pyramid, four bronze figures, representing all elements of the Defence Forces, stand guard over the eternal flame that emanates from the badge of the Defence Forces. The flame burns in perpetual memory of those members of the Defence Forces who have made the ultimate sacrifice.

Last July a parade by former soldiers was held in Ballsbridge to the US Embassy seeking the extradition to Lebanon of 71 year-old Mahmoud Bazzi, the main suspect in the murder of the two Irish soldiers Private Derek Smallhorne and Private Thomas Barrett in Lebanon 34 years ago.

Minister for Defence Simon Coveney welcomed the arrest later that month of Mr Bazzi. He said he hoped it was the start of a process to bring the alleged perpetrator of a “heinous crime” to justice and said the Irish government would do “everything possible” to pursue justice.

The ice cream seller originally from Lebanon, was arrested at his home in Dearborn, Michigan by US immigration officials. He was subsequently deported to Lebanon in January.

Private Smallhorne and Private Barrett were abducted and shot dead in 1980 in south Lebanon after their UN peacekeeping convoy was stopped by armed members of a Lebanese militia. A third soldier, John O’Mahoney, was shot and injured but survived. The killings were believed to be revenge attacks after Irish soldiers killed a Lebanese militia member in an exchange of fire.

Pte Barrett’s daughter Karen Barrett said the family have sought justice for her father’s killing for the past 34 years and exhausted all avenues in the Irish legal system.

Defence Minister Simon Coveney described it as a “first step” on what will “possibly be a further long and difficult road”. He and the government would “ do everything possible to pursue justice” for the peacekeepers, he said. Mr Coveney said the matter had been “continually pursued” over the years with all available channels in the Lebanon and US by successive Ministers for Defence, Foreign Affairs, officials and military authorities.

Taoiseach Enda Kenny raised the issue with the Lebanese authority during a visit last year to Irish troops serving with UNIFIL, he said. He said thoughts should be with the families of Privates Barrett and Smallhorne whose efforts and those of comrades “have ensured this issue was never forgotten”.

Campaigning on the families behalf, the group called Justice for Smallhorne and Barrett, met with American officials in Dublin last June to request US action against Bazzi. Ms Barrett said the families were ‘eternally grateful’ to the support group for their commitment and described the 34 year campaign for justice as ‘extremely difficult.’

Bazzi entered the US just over 20 years ago without proper documentation and admitted lying to obtain lawful immigraion status. He could ultimately stand trial for the abduction, torture and double killings while serving with a Christian militia. Mr Bazzi was transported in January on a commercial flight from Detroit, where he had been living, to Beirut under escort by officers with the Enforcement and Removal Operations agency. He was handed over to Lebanese authorities. Reacting to the news Karen Barrett, daughter of the late Thomas Barrett, said at the time the Barrett family was delighted to hear the Lebanese authorities had now detained Mr Bazzi.

She said it has been a long fight for justice and they hope the Lebanese authorities would give them justice for their father, Derek Smallhorne and John O’Mahony (who was shot an injured in the incident). She added her father gave his life protecting the Lebanese and the family hope this matter will now be addresssed. Ms Barrett also thanked those who have assisted them getting to this point including Simon Coveney and the Justice for Barrett and Smallhorne campaign.

Minister for Defence Simon Coveney welcomed the arrest and detention of Mr Bazzi. “I believe that this is a significant step in the pursuit of justice for Privates Thomas Barrett and Derek Smallhorne who lost their lives while on United Nations peace-keeping duty in Lebanon almost 35 years ago. It is an important day for the families and I wish to commend them for their continued commitment to securing justice for their loved ones.”

Mr Coveney added be believed the development to be very positive. Privates Smallhorne and Barrett were on duty with the UN Interim Force in Lebanon near the Israeli border on 18th April 1980 when they were captured. They had been in a three-vehicle convoy that was stopped by the South Lebanese Army, which was controlling the war-torn region at the time and in conflict with the Palestinian Liberation Organisation. Tension was high in the area on the day of the attack as the peacekeepers moved supplies to a border post. Twelve days earlier clashes between the SLA and Dutch and Irish soldiers serving with the UN left an Irish man and a militia man dead. The SLA had vowed to avenge the killing.

The field officer director for the Enforcement and Removal Operations agency Rebecca Adducci said: “ERO will continue to focus enforcement resources on individuals who lie and commit fraud to gain status in the United States. This removal should provide a stark warning to those who seek to game the system to obtain immigration benefits. This removal is the culmination of a sophisticated and meticulous investigation by several ICE components,” said Marlon Miller, special agent in charge of Homeland Security Investigations Detroit. “ICE is committed to ensuring the United States does not serve as a safe haven for individuals seeking to distance themselves from their pasts.” 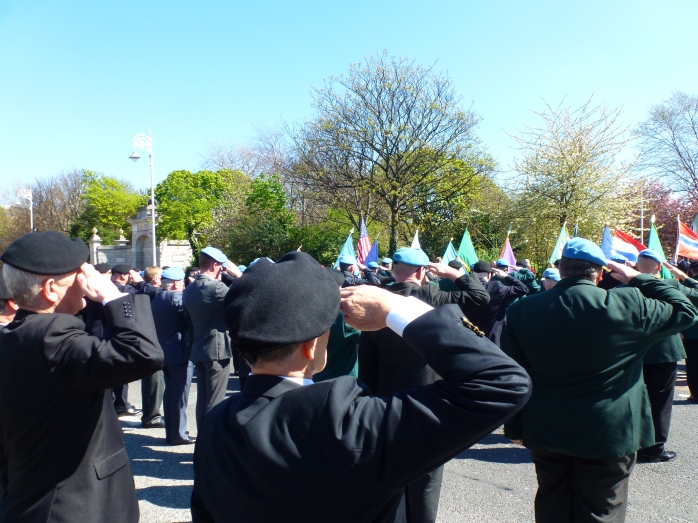