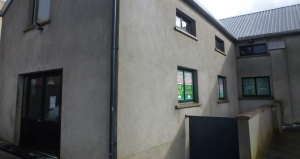 Planners in Monaghan County Council have received a fresh application to open a private members gaming club in a vacant commercial unit off the Main Street in Carrickmacross.

The planning notice was posted a week ago on the proposed site by a local architect on behalf of Carrick Gold Mine Ltd and received on Monday by the Council. This time a notice was posted on a car park gate that is visible from the Main Street. The new application seeks full planning permission for a change of use from an existing ground floor commercial unit to a private members gaming club with external signage, and including all other associated site works. The premises is situated beside the car park at the rear of Carrickmacross Shopping Centre at Drummond Etra, Main Street. At the February meeting of the Carrickmacross-Castleblayney Municipal District, the five Councillors present had expressed their objections to the proposal. Planners subsequently requested additional information from the applicants.

The proposed Private Members Gaming Club would provide card games like Baccarat and other games like Texas Holdem etc “for groups of dedicated card players”. It would the Club’s intention to have weekly Poker tournaments, some of which would be for local sports teams and associations, according to the application. The club’s facilities would be open to members only, who must be over eighteen. As part of the planning process, objections can be lodged with the planning department of Monaghan County Council during the next five weeks up until May 18th.