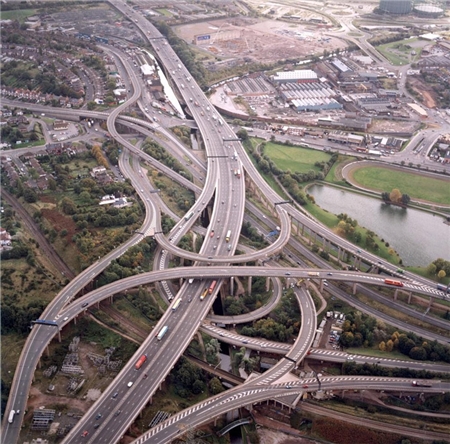 ‘Spaghetti Junction’ or to give it the proper title, the Gravelly Hill Interchange (Junction 6) on the M6 was still quite new when I arrived in Birmingham in 1975. I could not drive a car at that stage so the only time I came near it was when I travelled by train in the direction of Wolverhampton, as it is close to the railway and the canals.

Later, when I passed my driving test, I was able to access the interchange via the Aston Expressway from Birmingham city centre. From the Expressway you always got a good view of Villa Park, the home of Aston Villa F.C.

The term ‘Spaghetti Junction’ is believed to have been first used by a journalist at the Birmingham Evening Mail in the 1970s. It is the junction where the M6, A38 and A5127 meet. It was opened on May 24th 1972 by the then UK Environment Secretary, Peter Walker. It cost £10m to build and is held up by nearly 600 concrete columns. It was the last piece of this part of the 1960s motorway network to be completed.

The junction and the section of the M6 through Birmingham is carried on a three and a half mile long viaduct. It also carries the motorway over a number of canals and railway lines. The coming of the motorway transformed the local area.

What made me reflect on it was a BBC4 documentary, the second part of which is being shown tonight. It’s called ‘The Secret Life of the Motorway‘. It showed the growth of the motorways in Britain and featured the role played by Irish navvies in their construction. The M62 route across the Pennines was particularly difficult, according to the first programme in the three-part series.

One thought on “SPAGHETTI JUNCTION”