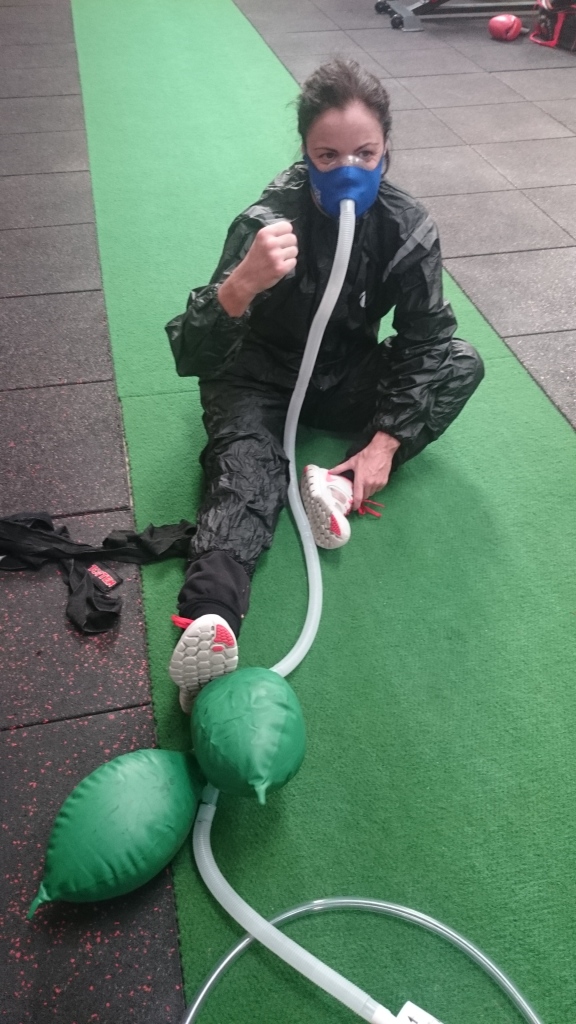 It’s the biggest challenge so far in her professional career for Christina Marks McMahon from Carrickmacross. Ireland’s only female professional boxer will be in the ring in Lusaka on Saturday against the Zambian WBC silver champion Catherine Phiri. At stake is the WBC interim world female bantamweight title. She left Dublin last Saturday with her husband and coach Frick to give her some time to adjust to the local conditions. But she has already done some important preparations locally.

When I met Christina in training last week she was wearing what looked like a thin space suit, and was attached to a mask giving her an air supply. She was sparring with Frick, whilst she received air that simulated an environment of 13,000 feet above sea level, similar to what she would find in Lusaka. The humidity there will be around 65% and temperatures can reach up to 27C. So the body of the boxer has to work harder in such an environment, as there is less oxygen. The machine being used was called an Everest series hypoxic generator, of the type that could also be used by mountain climbers.

This simulated high altitude training is one of the facilities offered at the Declan Byrne Centre of Excellence in Castleshane. By undergoing this exercise, it showed her professional and dedicated approach to boxing. Christina was delighted to discover only recently that there was such a facility almost on her doorstep in County Monaghan. It came just at the right time, she said.

As she finished her training session with a series of squats and shoulder presses, Christina told me she hoped she could help women to believe that it was never too late to go out and achieve their goals in sport or whatever field. Along with Frick she helps to run Carrickmacross Boxing Club at a new centre near the running track where they also have martial arts and fitness classes. She is coached by Sean and Paul McCullough in Belfast.

Christina who is now 40, started as a kickboxer when she was 20. In 2007 she won the world kickboxing title and three years later on reaching 35, decided to turn professional. This is her seventh fight and she has an unbeaten record in her six previous bouts (three of them by knock-outs). Her opponent also has a strong record of ten wins. Christina’s last fight was in September 2013 when she defeated  Lana Cooper. She was due to fight again in Berlin in March, but her opponent withdrew at the last moment.

“Catherine Phiri is what matters now; all the hard work has come to this and I know I have put in the effort to come away with a win”, she said.

Christina and Frick are hoping that Ireland’s Ambassador, Finbar O’Brien and his deputy will be present at the Mulungushi International Conference Centre to support their efforts not to mention members of the thriving Irish community “The Wild Geese”. A sell-out crowd is guaranteed  in a country where only soccer attracts greater attendances.

Declan Brennan who was a mentor to the late Olympian Darren Sutherland said his sports centre had something for everyone, to enable sportsmen and women to maximize their goals both on and off the field. It can also be used for rehabilitation of sports injuries. It has some equipment that cannot be found elsewhere in Ireland. As well as the anti-gravity machine, he can also offer the services of a sports psychologist, a nutritionist, a podiatrist and a physiotherapist. It’s a facility that has been used from time to time by local athletes and members of the GAA county football team.

For eight years Declan was Director of Sport at DCU. Now the success of Christina has given him a fresh interest in boxing, which has had an important place in the county since the days of Barry McGuigan and before. He is keen to promote the sport. He said the training Christina did at his centre would be very beneficial for her and he would be following her progress closely. Declan hope everyone in County Monaghan would be getting behind her and supporting her on Saturday.

One thought on “BIG FIGHT FOR CHRISTINA MCMAHON”