It’s fifty years since the pupils of Annalitten National School outside Castleblayney in the parish of Muckno made the big move from the Old School to the New School. To mark this milestone, the past pupils organised a school reunion on Saturday 27th June. The event marked the 50th anniversary of the move in 1965 to the current premises. It took place at the school at 4pm and many former students were in attendance, as was the Minister for Arts, Heritage and the Gaeltacht, Heather Humphreys T.D. After the reminiscing at the school, a social evening was held at the Glencarn Hotel, Castleblayney.

Stone plaque with name of school scratched out during WWII Photo: © Michael Fisher

The organising committee put together a selection of photographs of people who went to Annalitten school. Annalitten is a two-classroom co-educational Catholic primary school with a fascinating history. Elizabeth Brannigan was one of the organisers of the reunion. Five generations of her family have attended Analitten school, including herself. 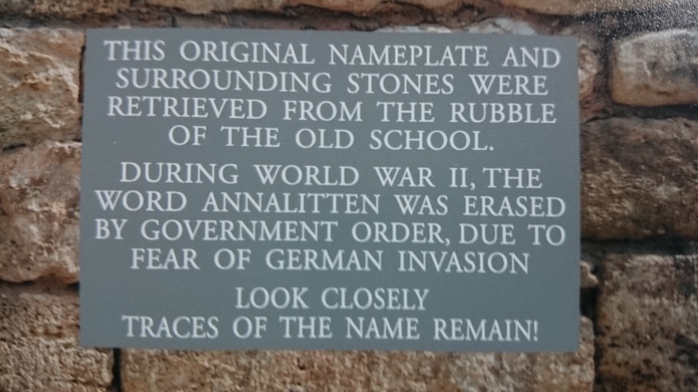 Past pupil John McBride has researched the story of the school and to launch the reunion shared some interesting facts about the old building:

If you were to walk past Annalitten’s fine National School, chances are you would hardly give a second glance to or even notice the adjoining car park. But this spot has a secret.  It was the site of a building with a remarkable claim to fame. That building, the’ Old School’, was no ordinary school around the corner, as it was born with a roar that would be heard as far as the Westminster Parliament.

1888 was a year of beginnings, including the founding of the National Geographic Society, Celtic FC playing its first official match, and the birth of John Painter, who would live to the 21st century and become the world’s oldest man.  The Castleblayney townland of Annalitten celebrated its own ‘first’ with the opening of a National School.  You might think that this local affair would hardly cause a stir, even in ‘Blayney.  But events would prove otherwise.

Soon after Annalitten NS opened, the RIC called on three local families.  Leading Irish MP, Tim Healy, heard about the police visits.  In May 1888, in the House of Commons, he questioned the Chief Secretary Arthur Balfour about the incident. Balfour replied that some children had been moved to Annalitten from the nearby mixed religion schoool. Three Catholic families kept their children at the mixed school. It’s believed that the local church was putting pressure on these families to send their children to Annalitten. The famililes were visited by the local police in order to establish the full facts.

The full text of the discussion can be read in the Hansard Parliamentary report for May 14th 1888 p.144. In the document, the politicians are referred to as ‘Mr. T. M. Healy (Longford, N.)’ and ‘A. J. Balfour (Manchester, E.)’. Annalitten is spelt as ‘Annalitton’

Annalitten being mentioned at Westminster is a great feat, but the central characters in the discussions make it even more special. They were both political giants. Arthur Balfour would  serve as British Prime Minister from 1902 to 1905. Tim Healy would go on to become the first Governor General of the Irish Free State in 1922.

The ‘Old School’ at Annalitten was replaced by a new building, a short distance away, in 1965.  The old building went on to serve as a community centre until it was demolished in the early 21st century, its longevity surpassing John Painter’s by just a few years. There is now a car park on the site, surely making it one of the most historic parking lots in Monaghan and Ireland.
© John E. McBride 2015