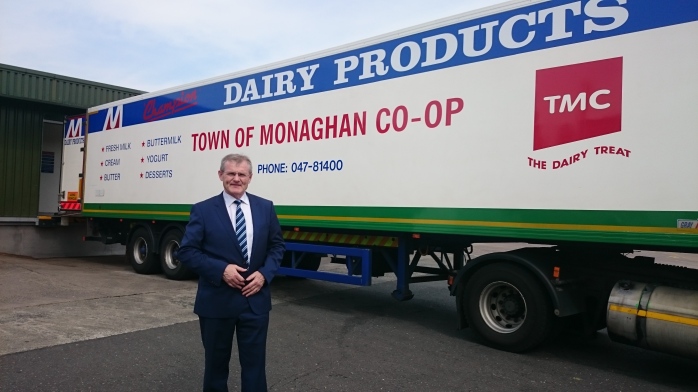 The proposed merger of Town of Monaghan Co-Op and Ballyrashane Co-Op in North Antrim has been strongly endorsed by shareholders of both Societies. There will now be a three weeks cooling-off period before the plans are put before the members again for formal approval. Both chief executives said afterwards there had been very good turnouts at the two shareholder meetings on Tuesday night in Monaghan and Ballyrashane. They said it was clear there was a resounding acceptance of the strategic fit between the two co-ops and that a merger would enable them to do things together that they could not do alone.

This development is one of the most important chapters in the history of the Co-Op since its foundation as the Town of Monaghan Co-operative and Dairy Society Ltd in 1901. Around 350 people packed into the Four Seasons Hotel in Monaghan on Tuesday. Of these, 263 were shareholders eligible to vote on the resolutions at the Special General Meeting.

At the start, the Chief Executive Officer Gabriel D’Arcy, who was appointed to the post last year, outlined his and the Board’s vision for the Co-op as it trades in an international market and following the abolition of EU milk quotas in April. He spoke about the crucial contribution that a merger with Ballyrashane would make in achieving that vision. Mr D’Arcy also outlined the benefits accruing to all suppliers both in the Republic and in the North as a result of the merger.

The meeting lasted three and a half hours during which there was an open and informative question and answer session with shareholders. When the first resolution, the proposed merger, was put to the meeting, it received overwhelming endorsement by 88% of those eligible to vote. A threshold of 75% was required for approval. At the meeting of Ballyrashane shareholders at the co-op’s premises, there was an even stronger endorsement of 97%.

Further meetings will take place at both locations on July 21st when a minimum of 50% approval will be required before a legal agreement can be drawn up between the two Societies. The merged entity will have a new name, but this has not yet been revealed. It would be a name that resonates with international customers and reflected the wholeness and Irishness of the dairy product. If approved, it would come into operation on September 1st. Based on current figures it would have a combined annual turnover of  €320 million (€200m TMC and €120m Balyrashane). It would become the second biggest dairy processor in the province of Ulster.

The amalgamation would see TMC making up 85% of the new co-op and the other 15% Ballyrashane. The headquarters would be in Monaghan. Members of the Board of both co-ops (16 in TMC and 10 in Ballyrashane) would hold their current positions until elections would be held for a new Board in eighteen months’ time. Hugo Maguire from Clones will be the new Chairman and Roy Irwin (Ballyrashane) the Deputy Chairman.

Gabriel D’Arcy who would be the new CEO and his Ballyrashane counterpart Nigel Kemps who would be Deputy CEO of the proposed new co-op said the discussions had been a very positive process. They had moved through the various stages in line with the expectations and guidelines agreed initially by both parties. Both sides said they were delighted with the degree of co-operation and good faith that had been exhibited since the possibility of a merger was announced a few months ago. Mr D’Arcy and Mr Kemps said they were convinced that a merged co-op had huge global potential and would be good for the supply base, the staff and the dairy industry in general. Both co-ops have discovered that they have a similar ethos and culture and common values and this has enabled them to build trust during the discussions.

At the meeting of shareholders, the TMC suppliers were told that one of the main benefits of a merger would be the ability of the new co-op to pay a stronger milk price than would otherwise be the case. It would help to secure the existing quality milk pool and grow it to between 600-700 million litres annually (currently around 430 million litres). Ballyrashane sources its milk from 108 farms within a fifteen-mile radius of its plant, which is close to the Giant’s Causeway. Town of Monaghan’s range of great tasting products include whole milk and skim milk powders, which are primarily for the export market as well as fresh milk, buttermilk, butter, yogurts and desserts all of which are marketed in Ireland under the “Champion” brand.

Ballyrashane Co-Op is the oldest dairy in Northern Ireland and produces milk, butter and a specialist cheese for the Greek market. It has blue-chip customers, such as Marks & Spencer. Its butter plant is described as one of the most modern in the country. Town of Monaghan’s range of great tasting products include whole milk and skim milk powders, which are primarily for the export market as well as fresh milk, buttermilk, butter, yogurts and desserts all of which are marketed in Ireland under the “Champion” brand.

Both co-ops employ around 150 people. Both have reiterated their view that a new merged entity would create a powerful new market force. They say their complementary geography and production facilities, technologies, and customer listings, together with the combined balance sheet strength offer the unique opportunity to create a true leader in the competitive Ulster dairy food sector, focused on innovation and competitiveness. An agreement would allow the new co-op to invest confidently up to €35 million in the TMC site at Artigarvan near Strabane in County Tyrone, introducing new processing technology to make value-added dairy ingredients such as butterfats and lactose free products for the international market.

Gabriel D’Arcy told the ‘Northern Standard’ he was very pleased and humbled by the support the merger proposal had received. The Chief Executive remained hopeful the plan would be progressed in conjunction with Ballyrashane in the months ahead. He believed the farmers who attended the Monaghan shareholder meeting were very astute and realised that times were changing. They wanted to take control of their destiny and to put their Society at the forefront of the agricultural industry. It was a big, brave move, he said.