Bus Éireann Inspector Paddy Gollogly waved farewell for the last time as the Letterkenny express pulled out of Monaghan bus station on Tuesday afternoon. Since 1992 Paddy has been the Inspector at the depot, supervising all passing services at this busy stop, which is also used by Translink cross-border coaches from Derry and Armagh. After 44 years in the job, Paddy was hanging up his Inspector’s hat and looking forward to an active retirement.

Ulsterbus/Translink drivers from Armagh and Derry wish Paddy Gollogly all the best on his retirement Photo: © Michael Fisher

A native of Carrickmacross, he began work as a school bus driver in the area in 1971. He progressed to being a road passenger driver in Dundalk and Monaghan, earning promotion to the role of Inspector in Dundalk in 1990. After two years there, he transferred to his native county. 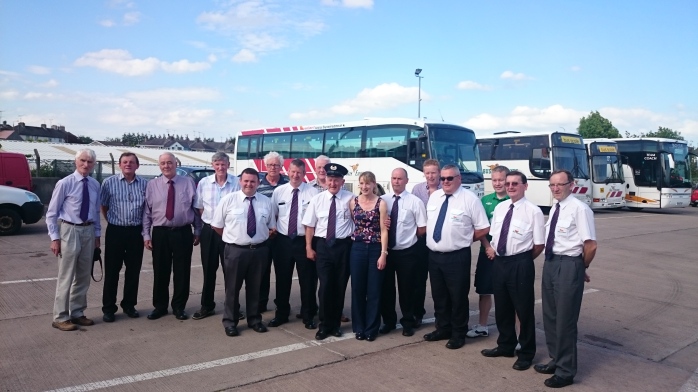 On his last day at work friends and colleagues gathered at the depot along with Paddy’s family to wish him well. They included Translink bus drivers from the services to Derry and Armagh. Several local Councillors also came to pay tribute to his courteous and loyal service over the years.

Paddy Gollogly is joined by his family including grandson Ryan for his last day at Monaghan bus depot Photo: © Michael Fisher

They were led by the Cathaoirleach of Monaghan County Council, Noel Keelan. Councillor Keelan said Paddy’s record of service was a fantastic achievement, in helping to transport people around the county and country for so many years. He always had a smile on his face as he dealt with passengers and this helped a lot when it came to dealing with any complaints, Councillor Keelan said. For Paddy it would be a change of life, rather than a retirement and he wished him and his family well. He complimented Paddy, a founder member of Carrickmacross Lions Club, on the huge amount of work he had done for charity. This included an annual Christmas swim at Creevy Lake in Carrickmacross, raising funds for various causes.

Paddy’s wife Bernie watched as a stream of drivers and former staff came to greet him. His daughter Elaine brought her infant son Ryan (aged eight months) to greet his grandfather and was joined by her brother Pauric.  It was a big day for Paddy but he was also conscious of the tragedy that had unfolded last week in Tunisia, in which a Bus Éireann colleague from Athlone, Larry Hayes and his wife Martina were shot dead, whose funerals will be taking place tomorrow (Friday). Michael McCormick, a Bus Éireann Inspector from Cavan said he had been told of the tragedy in a text message on Saturday afternoon and was also conscious of the suffering of the Hayes family.

He said he had a lot in common with Paddy, having started with the company in 1970 and he was the first port of call if he needed any back-up. He described Paddy as one of the old stagers and said they would all miss him. “Everywhere you went with Paddy, you had a laugh”, he said. Paddy was a great entertainer and he had enjoyed every hour of his company.

Councillor Paudge Connolly described Paddy as the very friendly face of CIE. Any time you met him, he was in good humour, he said. He did things for customers that went above and beyone the call of duty. He would be very sorely missed at this busy North/South hub and he wished him well on his retirement.

Staff at the Dinkin’s coffee shop at the bus station presented Paddy with a gift to mark his retirement. It was a portrait of himself painted by one of them, Goda Sirutyte, who is from Lithuania and has been in Monaghan for the past year.

Paddy Gollogly with the portrait painted by one of the Dinkin’s cafe staff, Goda Sirutyte Photo: © Michael Fisher

When news of Paddy’s retirement reached the councillors, they expressed concern that he was not going to be replaced as Inspector. But Councillor Sean Conlon said a lot of lobbying had been done and he was pleased to note that a replacement Inspector had now been appointed. The new man in the post is Jim McFaul, who is moving from Dundalk, where he has been Inspector. He has worked for Bus Éireann for 28 years and has also served in Drogheda as well as Monaghan. He said he was looking forward to the challenge but Paddy would be a very difficult act to follow. He said the issue of buses to and from Monaghan had been raised in the past, particularly the early morning service to Dublin Airport.

He would endeavour to keep them at the top of the agenda. He believed that many people were turning to public transport because of the cost of fuel and running cars and that if a guaranteed, frequent service can be provided, then people would use it. 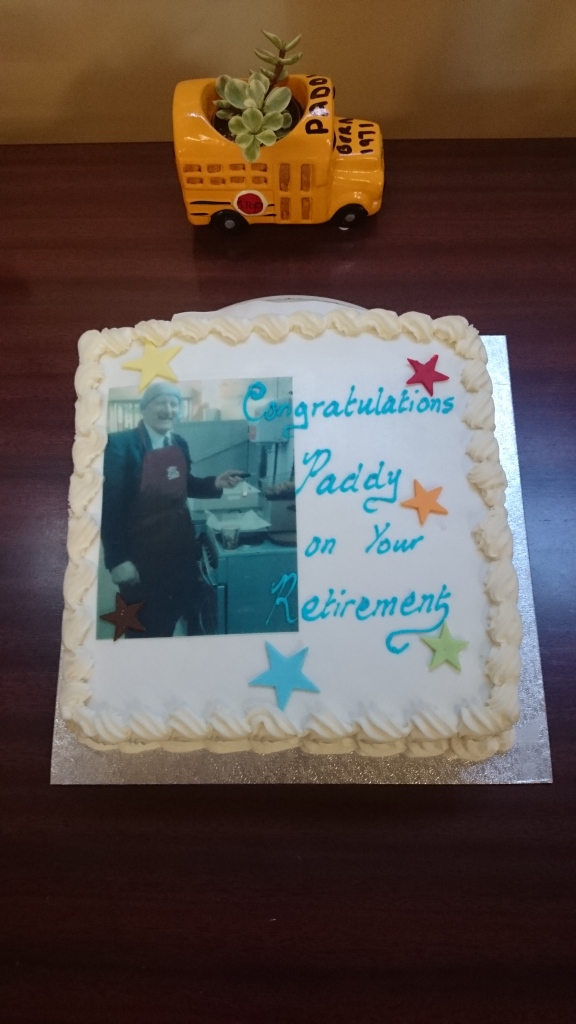 It was a great afternoon of celebration for a popular Inspector who has always done his best to serve the public and the people of County Monaghan during his long career with the semi-state company. The celebrations will continue this Saturday evening July 4th at Corduff Raferagh Community Centre, where Paddy has lived for the past thirty years. A night of music and craic is promised, with refreshments. A buffet supper will be served at 10pm and tickets will be available at the door on the night as the local community expresses its gratitude to Paddy Gollogly. 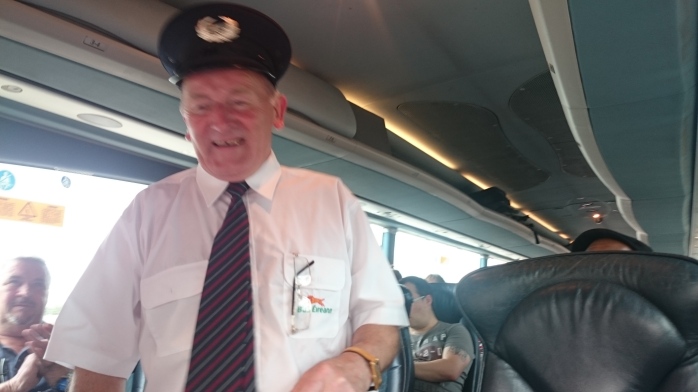 Paddy Gollogly expresses his thanks to the passengers on the Letterkenny express, who gave him a round of applause Photo: © Michael Fisher