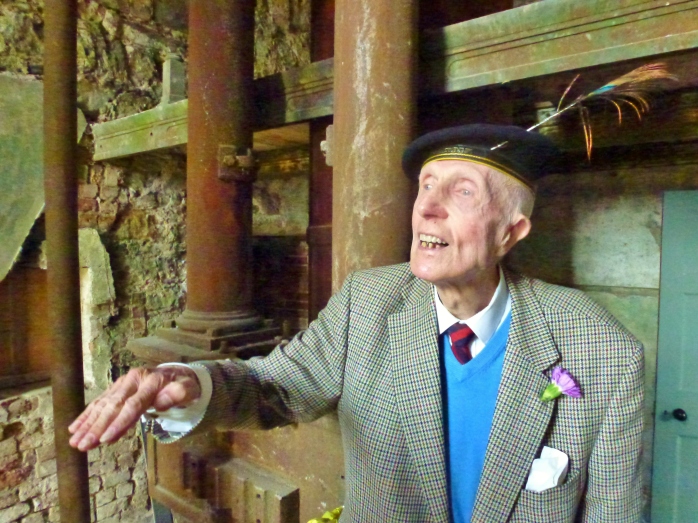 Sorry to learn this morning of the death of Sir John (Jack) Leslie eight months before his 100th birthday. He was single. His age did not stop him from dancing his way around various nightclubs in Ibiza and Monaghan! The news was conveyed by the family on social media @Castle_Leslie, adding that he died peacefully at his home.

In November last year (then aged 98) at the residence of the French Ambassador in Dublin, family and friends of Sir Jack joined the celebrations as the World War II veteran was awarded France’s highest distinction. The former Irish Guards officer was made a Chevalier de la Légion d’honneur, adding to his formal title of fourth baronet. The distinction was bestowed by the French Minister of State for Veterans and Remembrance, M. Jean-Marc Todeschini. Representatives of the British Army and the Irish Defence Forces were present for this important occasion that was another chapter in the historical friendship between Ireland and France. The Bishop of Clogher Dr Liam Mac Daid and Donagh Parish Priest Fr Hubert Martin were also among the guests.

Sir Jack said he wished to accept the award on behalf of all soldiers from the island of Ireland who fought and died in the two great wars. As a second Lieutenant in the Irish Guards, Jack Leslie commanded a unit at Boulogne-sur-Mer in 1940 that took on the advancing Panzers of the German army and held them back for several days allowing thousands of other British soldiers to be evacuated from Dunkerque. He was taken prisoner and spent the rest of the war in a prisoner-of-war camp in Germany.

Born on 6th December 1916 he was the eldest son of Sir Shane Leslie, 3rd Bt, and Marjorie Ide. He became the fourth baronet when his father died in 1971. He was educated at Downside School and Magdalene College, Cambridge. During World War II, he served as an officer in the Irish Guards during the Battle of France before being captured at Boulogne-sur-Mer. He then spent five years in POW camps. After the war he moved to New York and later travelled around Europe, settling in Rome. At the age of 78 he returned to his family’s homestead and traveled to Ibiza for his 85th birthday in 2001. He revealed the wedding location of Sir Paul McCartney and Heather Mills by admitting to reporters it was to take place in Castle Leslie, but that it was “a secret”. In January 2012 he appeared in the TV special “Secrets of the Manor House”, which discussed the Leslie family and Castle Leslie, among other manor homes. In 2015 he featured in the TV series “Tales of Irish Castles”. He was presented with the Legion d’Honneur at the French embassy in Dublin on 9 November 2015.

Jack Leslie survived his older sister, the author Anita Leslie (Anita King d.1985) and his younger brother, Desmond Leslie (d.2001). In the immediate line of succession for the baronetcy are nephew Shaun and nephew Mark. His father was a first cousin of the former British Prime Minister Sir Winston Churchill. His paternal grandmother, Leonie Jerome, and Churchill’s mother, Lady Randolph Churchill (born Jennie Jerome), were sisters – the daughters of American financier Leonard Jerome. His mother, Marjorie Ide, was the daughter of Henry Clay Ide, a former Governor-General of the Philippines.

Among the family stories examined in a current World War One exhibition at the National Library in Dublin was that of the Leslies of Castle Leslie, Glaslough, County Monaghan. Sir John was a veteran of the Second World War and was there to help with the opening of the exhibition. It was attended by the British Ambassador Dominick Chilcott and the Minister for Arts, Heritage and the Gaeltacht Heather Humphreys TD, from County Monaghan.

I reported in 2014 how the display will run for four years and features letters, diaries, newspapers, leaflets and photographs from the library’s archives and aims to depict the various aspects of the Irish experience of the war, and Ireland’s response to the conflict. It is supported by the British Embassy and is part of the National Library’s programme for the Decade of Commemorations.

Nikki Ralston, exhibition curator for the NLI, said: “Irish people had very diverse and complex reactions to World War I. This exhibition captures those sentiments, and also recounts the tense domestic situation in the Ireland of 1914. We felt one of the best ways to illustrate how Ireland experienced the war was to explore a range of themes through real-life stories. We have chosen to focus on four people who had very different experiences, and we have featured their writings – including personal diaries and letters– in this exhibition. These primary sources are complemented by audio, video and touchscreen installations to create a multi-layered, multimedia experience for all visitors.”

Among the four real-life stories featured in the new exhibition focus on:

**Captain Norman Leslie, 28 Rifle Brigade, second son of the well-known Leslie family from Castle Leslie, had become heir to the family estate when his elder brother, Shane, converted to Catholicism and became a supporter of Irish Home Rule. An experienced soldier when the war broke out, Norman was shot and killed in October 1914, while charging a German machine gun armed only with a sword (it was considered ungentlemanly for officers to carry guns). He is buried in France at Chapelle d’Armentieres Old Military Cemetery. The sword he was carrying when he died was eventually returned to the Leslie family, and now hangs in the gallery of Castle Leslie. It was carried by Jack, his nephew, for the opening of the exhibition.

Jack’s nephew, Mark Leslie; and Mark’s son, Luke were also present at the launch of the exhibition. The family spoke of how Norman’s memory is kept alive at Castle Leslie, where his sporting trophies adorn the entrance hall and his sword – considered a symbol of good luck – is used to cut all wedding cakes at the Castle.

Launching the exhibition at the time, Minister Heather Humphreys said: “This exhibition in the National Library allows us to understand the sheer magnitude of the First World War through very personal stories. By choosing to focus on four people and their different experiences, the Library has brought to life the real-life challenges and dilemmas which they faced 100 years ago. We can walk in their shoes, hear their words and see their hand-written letters. I was interested to see the Leslie family from Co Monaghan featuring in the exhibition. The story of the tragic death of Norman Leslie in 1914 gives us just one of example of the brutal way in which tens of thousands of Irish men lost their lives during the War. This fascinating exhibition is part of the Library’s programme for the Decade of Commemorations, and I would encourage as many people as possible to check it out.”

Addressing the launch, British Ambassador Dominick Chilcott said: “The British government are very pleased to be supporting the National Library of Ireland’s excellent work of commemorating the events of 100 years ago. The National Library’s archive of First World War documents is a rich one; and our understanding of the Great War and the Irish experience of it benefits hugely from this collection. The part of this exhibition that the British government helped to fund is the ‘listening post’, where you can hear period songs and readings of poetry and letters. The generation that went to war was a highly literary one. They wrote huge numbers of letters as well as much poetry and many books and diaries recording their experiences at the Front. We are fortunate in having so much material to explore.”

More details of the exhibition can be found here.