REMEMBERING THOSE WHO DIED AT THE SOMME 100 YEARS AGO

As she laid a wreath at the Ulster Tower in France last week, Minister Heather Humphreys stepped back and reflected on the carnage that had taken place on the battlefields of the Somme exactly one hundred years ago. She thought of the young men, including those from Ulster and other parts of Ireland, who had joined the British Army and had gone out to fight for their country and what they believed in. Some had written home to their mothers days before the offensive began and would die in the conflict.

The memorial which is similar to Helen’s Tower at Clandeboye, Co. Down, is beside Thiepval Wood where soldiers from the 36th Ulster Division including some Monaghan men left the trenches at 7.30am on July 1st 1916 to advance towards the German lines. Heather Humphreys laid a wreath along with the North’s First Minister Arlene Foster MLA, the Northern Secretary Theresa Villiers MP and Britain’s Prince Charles.

The service included representatives of the four main churches in Ireland. For the first 6time, the Catholic Archbishop of Armagh, Dr Eamon Martin, was present at Thiepval along with his Church of Ireland counterpart, Archbishop Richard Clarke. The Presbyterian Moderator Dr Frank Sellar and the Methodist President Reverend Bill Mullally joined them.

They jointly called for Christians of all traditions in Ireland to pray for peace in these challenging times.  The Church leaders said: “Let us put our faith into action: love our neighbours, reach out to the stranger, care for the vulnerable, build community and be agents for peace, forgiveness and reconciliation.”

Addressing the service Archbishop Clarke referred to how the Somme and Ulster had belonged together in the imagination of succeeding generations over the last century. He noted that the Somme represented “a connectedness for all time with many men and women, and not only in Ulster nor only for one Christian tradition.”

He also recalled the recent pilgrimage to the Somme last month which he jointly led alongside Archbishop Martin, and which included a cross-community group of young people from across the island of Ireland. Archbishop Clarke encouraged the present generation to relate the sacrifice of the Somme to its hopes, prayers and aspirations for the future. “We must believe in a hope of the future for our young people, as they must believe in it for themselves”, he said.

The Presbyterian Moderator, Dr Frank Sellar, spoke afterwards of how for many families like his own, the Battle of the Somme was still personal. He said the Great War had changed the course of human history and a century later the world is still living with the consequences of its aftermath. The Somme, as a particularly poignant part of that conflict, changed the lives of countless thousands and indelibly shaped whole communities in Ulster and throughout the island of Ireland. It was a time of terrible carnage and incredible heroism, he added.

“For us today, 100 years on, it is difficult to imagine, or even contemplate, the shear scale of the loss of life and the impact that it had then. My grandfather lost two of his brothers on the battlefield, while a third, who survived, received the Military Medal for his bravery,” Dr Sellar said.

“For many families, like my own, the events of 1916 are still personal. It is however an enormous privilege and honour to represent the Presbyterian Church in Ireland at such an historic occasion, as we pause and remember those who died and reflect on their loss.”

“I am also reminded of our own fractured society and troubled world we live in and the vital importance of critical reflection and inclusive remembering. I am also very conscious of the necessity to always search for true reconciliation and for the creative reimagining of a civil society humbly modeled on Christ Jesus for the common good,” he said.

The objective of the 36th Ulster division was to dominate the area between Beaucourt to the north and Thiepval to the south, necessitating the capture of all German trench systems in front of them, particularly the strongly defended Schwaben Redoubt. In addition to its twelve battalions, there were four battalions of Tyneside Irish and seven regular Irish battalions distributed in other divisions, giving a total of twenty-three Irish infantry battalions involved on this front. 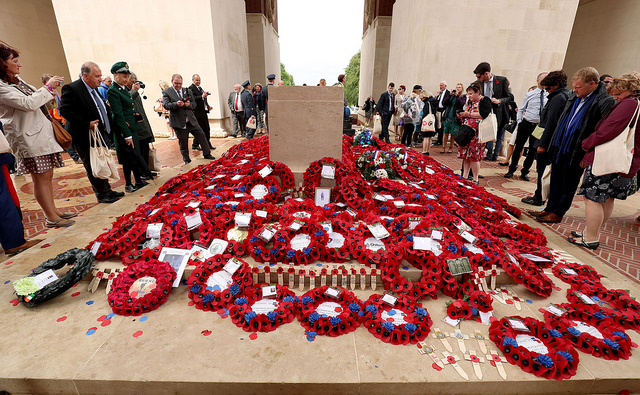 At the start of her visit last Thursday, the Minister laid a wreath at the Ginchy Cross in Guillemont. It remembers the sacrifice of the 16th Irish Division of the British Army, which entered the Battle of the Somme in September 1916. Minister Humphreys will return there for a separate ceremony to mark the centenary in September.

She then visited one of the many cemeteries in the Picardy area maintained by the Commonwealth Graves Commission. Delville Wood contains the graves of over 5,500 servicemen, of whom 3,500 remain unidentified. They include some Irish casualties.

Heather Humphreys also attended a special Abbey Theatre production of ‘Observe the Sons of Ulster Marching Towards the Somme’, which was supported by her Department, at the Maison de la Culture in Amiens. It was attended by the playwright, Frank McGuinness.

On Friday morning the Cavan/Monaghan TD accompanied President Higgins at the Thiepval Memorial for an international service marking the start of the Battle of the Somme on July 1st 1916. This ceremony was attended by a number of senior members of the British royal family, the British Prime Minister David Cameron, and the North’s First Minister Arlene Foster MLA along with her counterparts from Scotland and Wales.

The Minister said it was very important that the Irish Defence Forces led by Chief of Staff Vice Admiral Mark Mellett had been included in the ceremony along with British and Commonwealth servicemen and women.

CQMS Gerry White from Cork read from the last letter of Lt Tom Kettle, journalist and soldier with the 16th Irish Division. Students from St Paul’s community college in Waterford also played a role at the service, which was attended by 10,000 guests, mainly from the United Kingdom. Solicitor Brendan O’Reilly from Cootehill and his son Aoghan from Dernakesh National School travelled from Co. Cavan. They saw the grave of Mr O’Reilly’s grand uncle Rifleman J.P. O’Reilly. He served in the Royal Irish Rifles and was killed in September 1916. He is buried at the nearby Lonsdale Cemetery.

Speaking about her visit to France Minister Humphreys said:

“The Battle of the Somme was a seismic event, which had a huge impact on the island of Ireland. The Somme has particular resonance in my own province of Ulster, due to the very heavy losses suffered by the 36th Ulster Division on the first day of the battle. There were more than 5,500 casualties in the 36th on July 1st 1916, including 2,000 deaths. Over the four years of World War One, it is estimated that 50,000 Irish men were killed while serving in the British, Commonwealth or United States armies.”

“This had a profound effect on the island of Ireland, and almost certainly had an impact on every community across the country. For decades, the stories of these men went largely untold, and many of those who returned home from the Somme and other battles, felt forced to conceal their own experiences. The Decade of Commemorations has allowed us to explore some of these stories for the first time, giving those who fought and those who died their rightful place in Irish history.”

“During 2016, our centenary year, it has been incredibly important to me that we remember those who died fighting abroad, as well as those who died fighting during the Rising here at home. One hundred years on from both the Easter Rising and the Battle of the Somme, we are hearing a more complete narrative on the Irish experience in 1916, and the impact the events of that year had on our culture, our society and our psyche.”