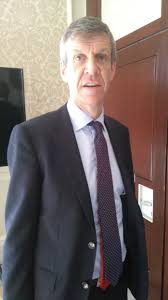 Campaigners have warned that the battle to stop the erection of hundreds of electricity pylons will make the Shell to Sea campaign “look like a walk in the park”.
Responding furiously to An Bord Pleanála’s decision to approve EirGrid’s plans to build a North South electricity interconnector, the North East Pylon Pressure Campaign (NEPPC) described it as “deplorable” and “an affront to democracy”.
Describing it as “biased”, Padraig O’Reilly, of the NEPPC, claimed it would only deepen public cynicism towards bureaucracy and intensify local opposition to the pylons.
However, he drew comfort from the fact that the project still has to navigate Northern Ireland’s planning system, while court battles will continue in both jurisdictions.
Woefully inadequate
A “viable, realistic and publicly acceptable option” to put much of the electricity line underground along public roads does exist, but it has never been properly examined, he went on. However, EirGrid had already decided on an overhead line and had put out, and awarded, a contract tender even before public consultation had taken place, he charged. EirGrid’s planning application was woefully inadequate and failed to contain enough information for an acceptable environmental study, he claimed.

Meanwhile, the utility had not accessed 75 per cent of the lands proposed for the 300 pylon towers and had communicated with only 5 per cent of the landowners, he added.
The planning decision ignores these deficiencies and heralds the end of An Bord Pleanála’s status in the public eye as an objective, independent decision-making body, he continued.

However, the anti-pylon group insists that there is still time for EirGrid to be ordered by Minister for Communications, Climate Action and Environment Denis Naughten to place the lines underground. “If political action is not taken, this project will make the Shell to Sea debacle look like a walk in the park. The will of the people will prevail,” said the NEPPC.

Meanwhile, opponents in Monaghan are equally determined in their opposition, saying An Bord Pleanála had “waved the application through”. “It’s a bad day for the Irish planning system,” said Nigel Hillis, who was particularly critical of the decision to issue such a finding so close to Christmas.

Monaghan County Council chairman PJ O’Hanlon described it as “very unfortunate” and supported calls for an emergency council meeting early in January.
There, councillors – who are all united against the pylon plan – will, he said, examine the ruling in detail and look at ways to oppose it.

Opponents in Northern Ireland remain hopeful that the planning authorities there will make a different decision when they rule on the pylon plan.
“We are disappointed at this ruling by An Bord Pleanála,” said a spokesperson for the campaign group, Safe Electricity Armagh and Tyrone (SEAT).