Paying respect at the grave of Captain Norman Leslie from Glaslough

Captain Norman Jerome Beauchamp Leslie from Castle Leslie, Glaslough died in the early stages of World War I. He served in the Third Battalion, the Rifle Brigade. 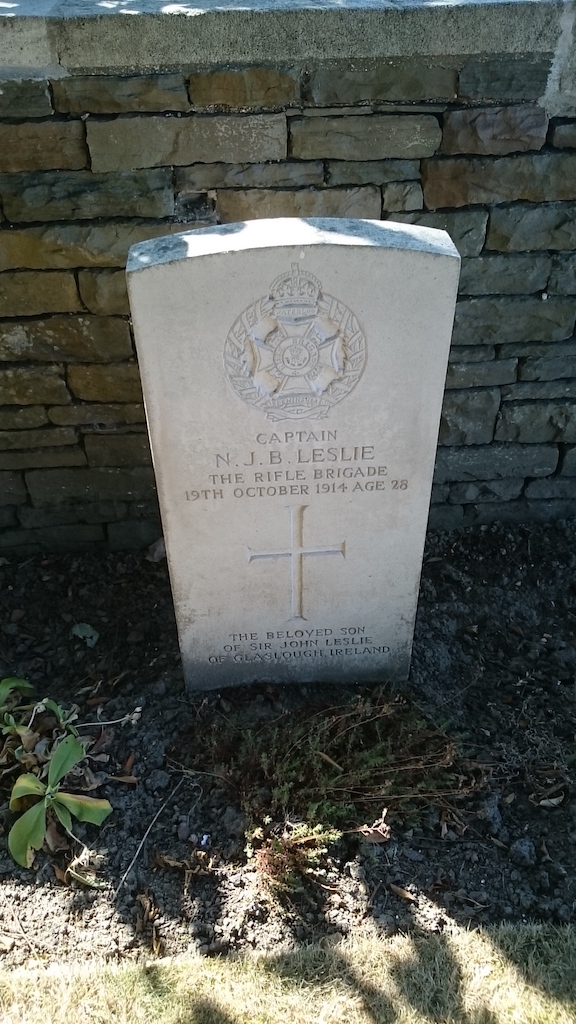 He was 28 when he was killed in action near Armentières on October 19th 1914. Mentioned in despatches. His grave is at La Chapelle d’Armentières military cemetery in France, not far from the border with Belgium. 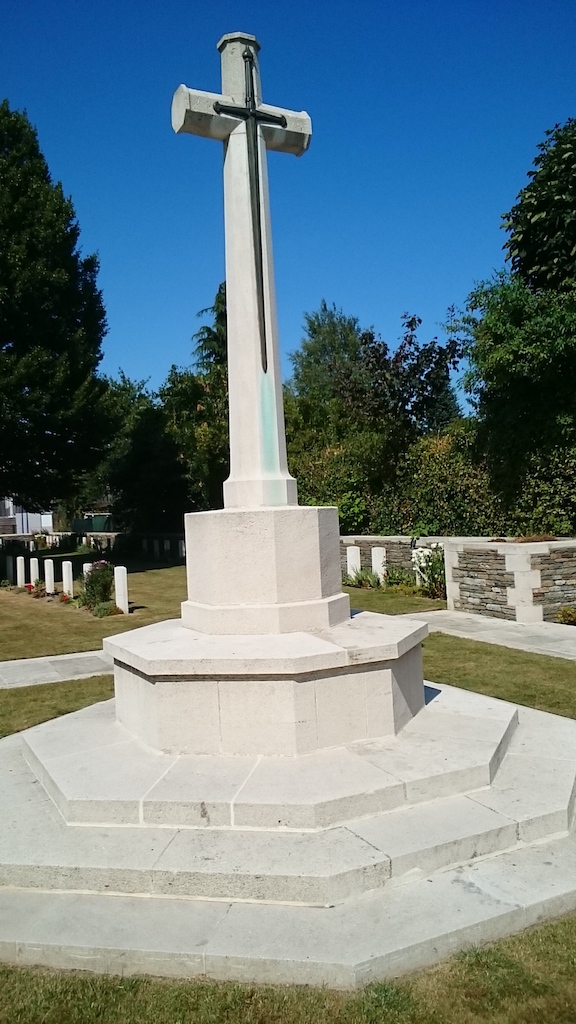 He was the second son of Sir John Leslie 2nd Bart and Lady Leonie Leslie of Glaslough. His mother was a member of the wealthy Jerome family from New York and her sister Jennie married Lord Randolph Churchill, father of Winston. Rest in Peace.

Captain George Harvey Hume Kelly aged 34 of the First Battalion North Staffordshire Regiment died the day after Captain Leslie and is buried alongside him. His mother lived in East Putney, London.

Around the time of the centenary of his death, Iain d’Alton wrote about the life of Captain Leslie in An Irishman’s Diary in The Irish Times. Here is some of the article:

“(Leslie) was educated at Eton and Sandhurst, was commissioned a 2nd Lieutenant in 1905 and joined the prestigious Rifle Brigade in October that year. He served as ADC to Sir John Maxwell (the suppressor of the Easter Rising) in Egypt from September 1908 to April 1910. In 1910, he was the last British officer to fight a duel – with a Turkish diplomat, over said diplomat’s wife. Packed off to India, he became ADC to Lord Carmichael, the governor of Bengal where, again, he had a scandalous romantic entanglement with a married woman.”

“When war broke out, he exhibited an almost unbelievable heartlessness about early casualties, writing to his mother in October 1914: ‘I can’t see that our losses have been heavy at all. What are 2,000 killed and 8,000 wounded out of a force of 80 or 90,000 British who repelled 200 or 300,000 Germans. It’s wonderfully small…only 2½% killed. One would imagine it would be much more like 10%.’ Leslie’s war was about the merit of being honourable. At its outbreak, he wrote to a friend: ‘Let us forget individuals and let us act as one great British unit, mixed and fearless. Some will live and many will die, but count the loss not. It is better far to go out with honour than survive with shame.'”

Less than three months after the War started, on October 18th, 1914, Captain Leslie  “was killed by a German sniper while on reconnaissance at Armentières, near Lille, and was hastily buried. His brother Shane, later a writer of renown, and serving in France, organised for his body to be recoffined in December 1914. He wrote to Leonie that: ‘He lies about a mile behind the trenches occupied by his regiment and within sound of the guns of both armies whose shells pass daily above his head . . . the sky was ripped with the flashes of the guns, while a gigantic German searchlight threw the surrounding countryside into sepulchral relief.’”

“Shane said that when the grave was opened, Norman’s clothes were unsoiled and clean. His hands were white and pink at the edges, and rested on the wound which killed him. To fit him in the new pine coffin, they had to unshoe him. Shane wrote that he did not cry until he saw ‘that lonely pair of boots’ sitting on the wretched earth. Norman, he said, seemed to have borne ‘no trace of suffering or contortion . . . as one who had reached his appointed end with credit and dignity’. Thus he acted his part, even beyond death.”

Lady Leonie Leslie “immediately wanted to visit her son’s grave, but Shane advised against it. ‘Stay at Glaslough where Norman’s memory is vivid in the minds of all whom you meet… stay there where the whole atmosphere yearns for him and where his name will outlive ours.’ But his parents could not stay away forever. Sir John Leslie wrote to his wife in late November 1918, a few days after the Armistice: ‘I should like to go to Armentières in the spring, not in cold dreary winter, and lay spring flowers on our boy’s grave, both of us together. His spirit knows what is going on, and that his life was not lost in vain.'”