Margaret Nolan places a wreath at the grave of Pte O’Keeffe from Co. Kilkenny

Margaret Nolan from Bennettsbridge, Co. Kilkenny, who was part of our group guided us to the Quarry Cemetery at Montauban in France.

Private Patrick O’Keeffe from Clinton, Co. Kilkenny, is buried here. He served in the 6th Battalion Royal Irish Regiment and died on September 1st 1916, aged 22. His Battalion was part of the 16th (Irish) Division and was involved in the Battle of the Somme (July 1st 1916). 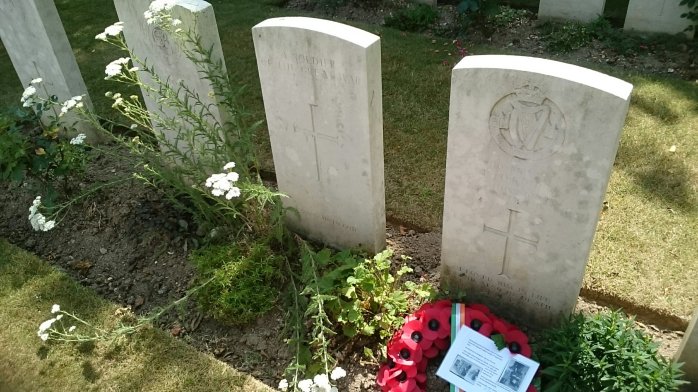 An unknown soldier is buried beside Pte O’Keeffe

A small tricolour marked the nearby grave of Corporal J Conroy from the Leinster Regiment.

Among the other Irish born soldiers to be buried at Montauban are two from Longford. The website longfordatwar.ie records them as Corporal James J. Gilchrist or Gilchrest from St Michael’s Road in Longford town, and Gunner John Mallon from Kilcourcey, Edgeworthstown.

James Joseph was born in Naud’s Yard, c. 1886. He was married to Ann (later O’Connor), and by 1911 they had one daughter, Mary-Kate. Ann lived at 54 St. Michael’s Road, Longford during the war. James left his property and effects to Ann after his death.

The Longford Leader dated25th September 1915 printed a letter Gilchriest sent to his father, which talks about his leisure time, but is especially noteworthy as it mentions other men from Longford town with him in a Longford Section of the 2nd Leinsters at the Yser Canal, now known as the Ieperlee, a canalised river in Belgium. The article reads:

James J. Gilchriest, son of Mr. Patk. Gilchriest, of Ross’s Yard, Longford who has been at the Front with the 2nd Leinsters since the outbreak of the war, writing home to his father under the date 14th September, says:-

“I am enjoying a day’s eel fishing, but my tackle is not the best; I have a safety pin for a hook, and a telephone wire for a line, but still I am catching some good ones. We are on the bank of the Yser Canal, and there is plenty of bream.
“I may tell you we are not strong enough for the firing line, so if you see any stragglers, you might send them to the old “109 Royal Canadians”, or the “Mad Mullahs”, as we are called since the last engagement, for we want Irishmen and nothing else.
“We have Dick Healy, here, another of the Gods; that is the sort we want. I have a fine selection in my section, the Longford Section – Shiels, Reilly, Lenehan, Cowan, Hayden, Healy, and myself. We are game for anything; nothing cows us, and we live high as far as poaching goes. I was expecting a few more of the boys, but they are gone to the Dardanelles.” And he then breaks into rhyme on the subject of the “Charge of the 2nd Leinsters” and at the end adds “feeling thirsty, but no relief,” and by postscript he writes: “Tell Jim McNally there is plenty of hides and skins..”

Gunner Mallon (101166) was killed during the Battle of the Somme. According to longfordatwar.ie:

He enlisted in Warwickshire in England. John was was born c.1895 and was the eldest of the children of John and Annie Mallon, Kilcourcey, Edgeworthstown. He and his brother James joined the British army in 1915. James was later discharged because it was discovered that he had lied about his age.

John served as a Gunner in the Ammunition Column, 86th Brigade, Royal Field Artillery. He was on active service for only two or three months before being killed on 25th July 1916. its believed the Battery he was serving with came under shelling from the Germans at Caterpillar Wood near Guillemont. The Longford Leader on the 19 August said the following on his death:

‘Edgeworthstown Notes: Obituary – We regret very much to record the death of Gunner John Mallen [sic] R.F.A., eldest son of Mr. James Mallon, D.C., Cranleybeg, Edgeworthstown, who was killed in action in France, on the 25th July last. Gunner Mallon enlisted with his brother last year, and has been on active service in France for the past two or three months. He has not yet reached his 21st birthday, and was a fine handsome young Irishman. The greatest possible sympathy is felt for his father and mother in their very sad bereavement, and the only consolation they have is in the thought that their son dide [sic] gallantly, with his face to the foe, and was well-prepared to make the great sacrifice. -R.I.P.’