On high ground overlooking the River Ancre in France, where some of the heaviest fighting of the First World War took place, stands the Thiepval Memorial. Towering over 45 metres in height, it dominates the landscape for miles around. It is the largest Commonwealth memorial to the missing in the world and is maintained by the CWGC.

Thiepval Memorial was designed by the famous British architect Sir Edwin Lutyens and comprises a series of intersecting arches which increase in height and proportionate width. Construction began in 1928 following lengthy negotiations about the site with foundations dug to a depth of thirty feet. Wartime tunnels and unexploded ordnance were discovered during its construction.

Thiepval Memorial was unveiled on 1st August 1932 by Prince Edward, the Prince of Wales. The ceremony was in English and French. Each year on the anniversary of the start of the Battle of the Somme (1916) on 1st July, a ceremony is held there.

On 1st July 2016, to mark the centenary of the Battle of the Somme, thousands of people attended a special ceremony including members of the British Royal family, UK Prime Minister David Cameron, Labour leader Jeremy Corbyn, French President François Hollande, President Michael D. Higgins and Minister Heather Humphreys from Monaghan, who was then responsible for Commemorations. I attended in my capacity as a member of the Irish veterans’ group, O.N.E. along with its Chief Executive Ollie O’Connor. 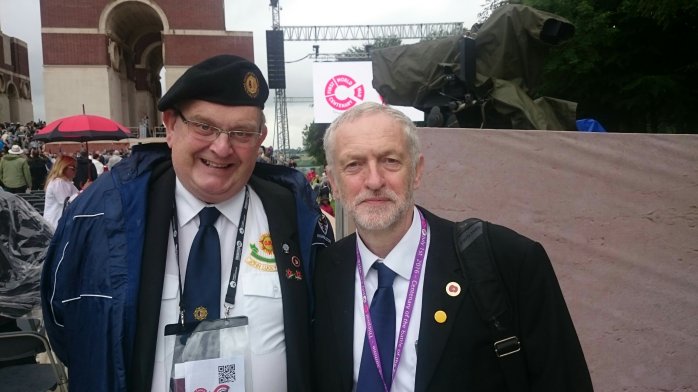 Behind the memorial is the Thiepval Anglo-French Cemetery. The cemetery contains the graves of 300 Commonwealth servicemen and 300 French servicemen. The majority of these men died during the Battle of the Somme, but some also fell in the battles near Loos and Le Quesnel.