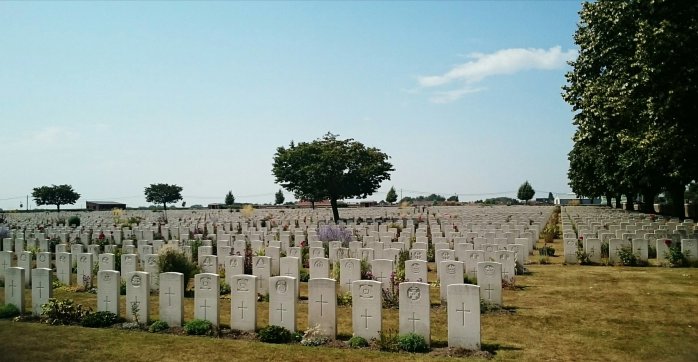 Poelkapelle cemetery is the third largest Commonwealth Graves Commission cemetery in the Westhoek area near Ieper in Belgium.

Among the soldiers buried there are some from New Zealand.

The great majority of the graves in this cemetery date from the last five months of 1917, and in particular October, but certain plots contain many graves of 1914 and 1915.

There are now 7,479 Commonwealth servicemen of the First World War buried or commemorated in Poelkapelle British Cemetery. Of the burials, 6230 are unidentified but special memorials commemorate eight casualties known or believed to be buried among them.

Other special memorials commemorate 24 servicemen buried by the Germans in other burial grounds in the area whose graves could not be located. There is also one burial dating from the Second World War.

The cemetery was designed by Charles Holden. Among those buried in the cemetery is Private John Condon of the Royal Irish Regiment, who at 14 is thought to be the youngest battle casualty of the First World War commemorated by the Commonwealth Graves Commission.