How I reported the closure of the Bose factory in January in The Northern Standard Photo: © Michael Fisher

Michael Fisher looks back on some of the main stories of 2015:

It was the first major story I wrote for the Northern Standard when I began covering the Carrickmacross area on a temporary basis a year ago. The news came out of the blue, creating shockwaves in Carrick that are still being felt.

In a statement of 290 words issued by a public relations company in Dublin, Bose Ltd. announced it was closing its County Monaghan facility with the loss of 140 jobs. It was probably just a coincidence that the news was released on a Thursday afternoon, the day on which this weekly newspaper is published. So the coverage had to wait until the following week. But this was a decision that had been taken some time beforehand at the company’s headquarters in the United States, where a plant in South Carolina was also being shut down. 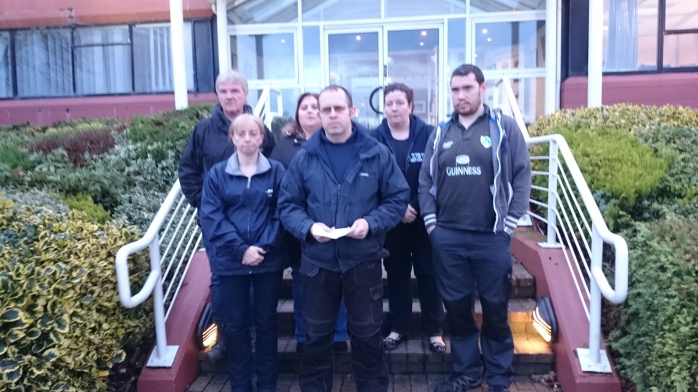 Workers at the BOSE factory in Carrickmacross react to news of the plant’s closure Photo:  Michael Fisher

What offended the workers most was the way the news was relayed to them. They were called into the canteen at 4pm that black Thursday (22nd January 2015) and by video link were addressed by the company President. They thought it was going to be part of the usual quarterly update on company performance. Instead they were being told they would be made redundant in April.

After lobbying by union representatives and local politicians, the date for the shutdown was postponed until the end of May, in the hope that some workers might be able to find alternative employment. Some like Pat McNally had been with the company since it was established by Dr Amar Bose in July 1978. The plant provided final assembly for select home cinema systems and Wave radios for the European market, and some remanufacturing for the region.

Councillors pressed the IDA to find an alternative employer but so far no replacement has been found, although some clients have viewed the premises. In the aftermath of the closure it was discovered that the factory premises was now owned by a private group, following new arrangements regarding IDA leases.

The last day at Bose (May 29th) was sad for all concerned. The workers came in small groups to collect their redundancy payments. The car park gates were locked and a few days later, the plant and machinery inside the building were put up for auction, bringing to an end a 37-year history of production at the site.

As they left the plant, the workers again pointed out that this had been a profitable operation for Bose, and their Irish base in Europe had never been affected by industrial disputes. They said they had always shown their loyalty to the company and had generally been treated well by their employer, until the founder of the company Dr Amar Bose had died two years ago.

In the words of the Carrickmacross-based Sinn Féin MEP Matt Carthy, the closure of the plant was devastating for the local economy and community who felt they had been let down by the government. It was the end of an era and a huge blow forthe whole of South Monaghan and beyond.

In April an art student from County Monaghan won the overall prize in the Texaco Children’s Art competition. A great achievement by my neighbour, Frances Treanor from Drumdart, Tydavnet. The 18 year-old was rewarded with a trip to Tokyo to represent Ireland in an international art exhibition, along with a cheque for €1500. Her self-portrait drawing done in black ballpoint pen was part of the 16th International High School Arts Festival along with some other Texaco award winners. Back at her home in Tydavnet she told me about her experiences in Japan, a country she said she would return to if she got a chance.

Her five days there introduced her to Japanese food such as tempura (fish and rice) for which chopsticks were used. She was served dishes of sushi and sukiakki and also got time to do some sightseeing. This included areas such as Harajuku, the Meiji shrine and Takeshita-dori street. Frances also visited a rural area a few hours outside Tokyo and saw a red panda being fed in the zoo. She noticed that the streets were very clean, as well as being busy and hectic. Everyone was carrying an umbrella, Frances told me, and there were special holders at the entrance to the museum where visitors could leave them.

The winning self portrait was completed by her in two weeks and was described by the chair of the judging panel, Professor Declan McGonagle, as having been executed “with the skill and delicacy of a master”. The talented Frances had featured among the prizewinners in 2012 when she won second place in her age category for her work “Lighting Up the Imagination”. She is one of seven children and is studying art at the National College of Art and Design in Dublin, alongside her twin sister Maeve.

Frances was keen to thank her former art teachers at St Louis Secondary School in Monaghan, Teresa Mahony and Stephen Penders, who she said had always encouraged and developed her talent.

EirGrid has begun a fresh attempt to get permission for a second North/South electricity interconnector. It would involve the erection of over 400 pylons carrying a 400 kV high voltage cable across five counties from Meath to Tyrone, including Monaghan. There has been strong opposition to the plan, with over 900 submissions to An Bord Pleanála since the new planning application was submitted in June. The Board is expected to make a decision later this year on whether to hold another public enquiry into the plan. More details of the EirGrid response to the submissions and objections can be found on p.14 and the Northern Standard will continue to report on this controversial issue in the coming months.