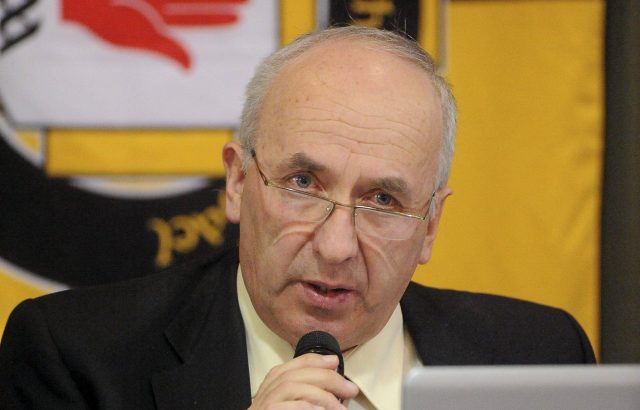 The GAA in Ulster is mourning the loss of the Ulster Council Secretary and Chief Executive Danny Murphy, who died yesterday (Wednesday) at the age of 67. He stood down from his role earlier this year because of ill health but was to remain in the post until February 2017. Mr Murphy’s funeral Mass will take place today Saturday 10th December at 12 noon in St Mary’s Church, Burren, near Newry. Ar dheis Dé go raibh a anam dílis.

Past President of the Ulster Council Martin McAviney from Ballybay said Danny had acted as a mentor to him in his thirty years’ involvement with the Council. He paid tribute to Mr Murphy who he said was a personal friend and had travelled with him to many places throughout the province on GAA business.

“He was a man of absolute honesty and integrity. He had the foresight to bring the Ulster Council to a whole new level in the sporting world, in areas such as coaching, protection issues and above all his role in the peace process since the signing of the Good Friday agreement in 1998. He was able to bring everyone with him when it came to taking initiatives. His legacy is that there is now a structure in place in Ulster GAA that is fit for purpose in the modern era”, he said.

Mr McAviney said the late Mr Murphy had a good knowledge of legal issues such as ownership of property. He also knew the fine details of the GAA rule book. He continued: “My last duty as President of the Ulster Council was to accompany Danny at the grounds awards last year. He was a guiding light for many people at club level. He was a very fair man, who always did things by getting agreement on them. His belief was that the only way of going forward was to ask people to take ownership of projects”.

The esteem in which he was held by other sports can be judged by the responses from organisations such as Ulster Rugby and the Irish Football Association. Irish FA Chief Executive Patrick Nelson said: “I got to know Danny very well and I enjoyed working with him. I was often able to count on his wise counsel.

“He was keen for the various sporting organisations in Northern Ireland to work together to improve facilities for all sports.”

The North’s First Minister Arlene Foster and deputy First Minister Martin McGuinness said in a statement: “Danny Murphy made a colossal contribution to sport over many years and his death will leave a massive void. Our thoughts and prayers are with his family and friends at this difficult time.”

SDLP South Down MP Margaret Ritchie said: “Danny was a powerful force for reconciliation on the island of Ireland, and between Britain and Ireland. He made an enormous contribution to the professionalism of the GAA in Ulster.

Uachtarán Chumann Lúthchleas Gael Comhairle Uladh, Michael Hasson said: “It was with profound sadness that we heard of Danny’s passing. We know that this sorrow is felt by all Gaels in Ulster, Ireland and throughout the wider GAA world. Danny was an outstanding leader who provided unstinting dedication to the GAA in Ulster for over 35 years. His contribution to every aspect of the GAA, from his initial involvement with St Mary’s GAC, Burren, his beloved County Down and his immense commitment to Comhairle Uladh brought unprecedented success to every unit of the Association he was involved in.” 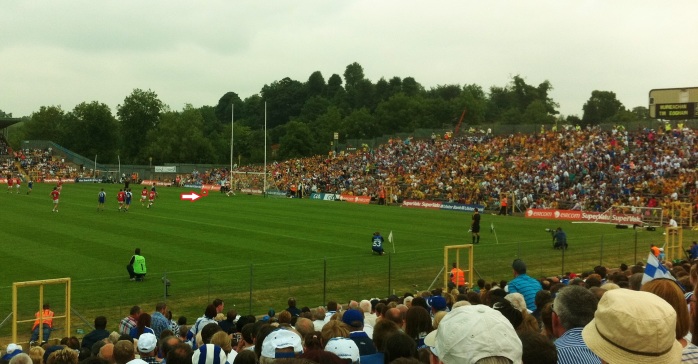 MONAGHAN supporters have been a long time waiting for an Ulster senior title: 25 years, in fact. Having waited so long it was nice to be able to claim a double at Clones, added to a fourth-in-a-row Ulster final victory by the ladies last weekend against Tyrone. It was very appropriate that having introduced the members of the 1988 Monaghan team to the crowd at half-time, the seniors went on to beat the current All-Ireland champions Donegal and take the Anglo-Celt Cup. It was even more special because two hours earlier the Monaghan minors had put in a fantastic finish to win the title for the county for the first time in 68 years.

1945 was the last occasion when Monaghan minors took what was only their third Ulster title. A man in the seat beside me in the Pat McGrane stand remarked that one of the stars of that side was from his parish in Sutton Dublin, namely Mackie Moyna from Scotstown, twin brother of Tommy. Mackie’s wife Margery (Boylan), a former teacher also from Scotstown, died recently. Rest in peace.

UPDATE: Since writing the blog yesterday, I have listened back to the end of the minor game commentary on Northern Sound by an almost hoarse Sean McCaffery. He lists the names of the victorious 1945 side and among them was Tommy Moyna, but not Mackie, so my informant was mistaken. However I did find one report on the Hogan Stand website when the twins received Monaghan GAA Hall of Fame awards in 1993. It explained how Mackie made an unregistered appearance in a Monaghan minor jersey at Croke Park in the all-Ireland semi-final in 1945 against Leitrim!

As usual, the atmosphere in Clones in the build-up to the two finals was tremendous: a sea of colour all along Fermanagh Street. Family groups that travelled from Donegal or further afield finding a suitable green patch on which to have a picnic. Others packing into the several pubs and debating the chances of their team. How long more the Ulster Council of the GAA will keep the final at Clones is another matter; hopefully this will not be the last time Monaghan win an Ulster senior title at Clones. The excellent match programme (€5/£5) contained an article about the planned redevelopment of Casement Park in Belfast, which has already been upgraded with floodlights. As someone who collects sports programmes, I believe this one will be in demand in years to come.

I had listened to some of the first half of the minor match on the car radio. When I took my seat, Monaghan were trailing by five points and the chance of a victory seemed to have slipped away. But a penalty (a bit fortunate) in the closing moments of the game was slotted home by Fearghal McMahon, giving them a single point advantage. It was followed by a Donal Meegan point in injury time, thus ensuring a Farney victory 4-10 to 2-14. Tyrone had led 1-9 to 2-1 at the break.

The key to Monaghan’s victory in the senior match was the way they controlled Donegal right from the throw-in. They were four points up within nine minutes. Donegal’s opening score came in the 31st minute through a Colm McFadden free, followed by a Frank McGlynn point in injury time, making it 0-5 to 0-2 in favour of Monaghan at the break. The Farneymen were soon on the scoreboard again in the second half, through Kieran Hughes. Monaghan continued to dominate and were the better team throughout. Nice to see Tomás Freeman coming on as a substitute at the end and contributing an insurance point. 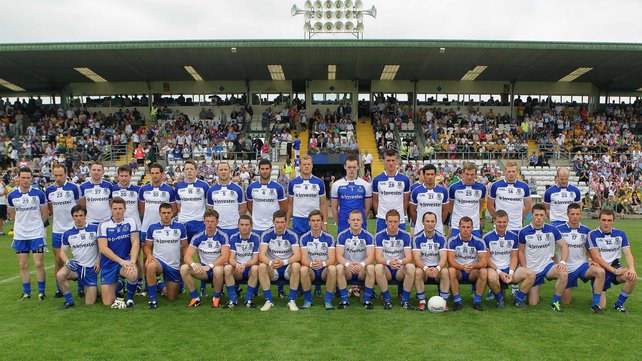 The final score 0-13 to 0-07 for the home side. Then it was time for a massive celebration with thousands among the crowd of 31,914 invading the pitch to join the excitement as the Anglo-Celt cup was presented by the President of the Ulster Council, Ballybay man Martin McAviney, to the Monaghan captain Owen Lennon. Watching the proceedings was the GAA Ard Stiúrthóir Páraic Duffy, another  proud Monaghan man! Former GAA President Sean McCague from Scotstown who managed the winning 1988 county team was also there, as were many other Monaghan personalities including Big Tom McBride who played on Saturday night at a country music festival in Monaghan town.

It’s been an important weekend for the GAA in County Monaghan. First there was confirmation that the new Uachtarán Chomairle Uladh (President of the Ulster Council) is Ballybay man Martin McAviney. Many in the border area and the Press Golf Society will remember the great work done by his late brother John, a photographer.

At the same time, the GAA Ard Stiúrthóir Paraic Duffy was back in Monaghan to attend a gala ball organised by his alma mater, St Macartan’s College, where he was also the Principal for many years. It was celebrating the 100-year history of the GAA in the College, which includes winning the MacRory Cup on nine occasions, but not since 1956 although they have appeared in two finals in the past decade. On Wednesday week (27th February) the “Sem” will take on St Paul’s Bessbrook (Armagh) in the semi-final of the competition under lights in Armagh (7:30pm).

Martin McAviney is a member of the Pearse Brothers club in Ballybay. He is a member of the Club Committee and a Club Trustee. He has previously served as Club Secretary and Club Chairman and received the Coiste Chontae Mhuineachain Senior Official of the year 1984. He joined the Monaghan County Board as Ulster Representative in 1987 and held the position until being elected as P.R.O. of Comhairle Uladh in 2004, a role he carried out very effectively.

During his term as P.R.O., Martin was awarded the Ulster GAA Writers Communications Award in 2005. Martin took up a position of Cisteoir (Treasurer) of the Ulster Council in 2007, and in March 2010, he was elected as Leas-Uachtarán (Vice President). On his first full day in the new job, Martin was at the Athletic Grounds in Armagh to watch the interprovincial hurling and football semi-finals, previously known as the Railway Cup.

The competition was reinstated to the GAA calendar last year, but has failed to attract the support it used to get in the 1950s and 60s when large crowds would turn up at Croke Park on St Patrick’s Day for the finals. The club finals have taken over the slot and continue to bring in the numbers, but it seems the appetite for interprovincial competitions has faded, judging by the attendances at the semis. So the final of the football competition at Croke Park next Sunday has now been fixed to coincide with AIB Club junior final. The hurling final will be a week later. 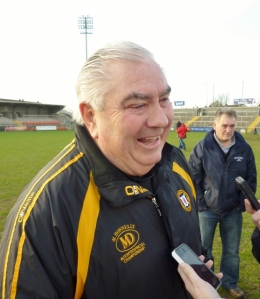 Nice to see former Armagh boss Joe Kernan back in action as coach of the Ulster football side. He expressed his concern at the low attendance, given the quality of football on display. Monaghan made an important contribution to the Ulster side with Conor McManus scoring four points. The team was captained by Scotstown’s Darren Hughes, whose brother Kieran came on as a substitute. 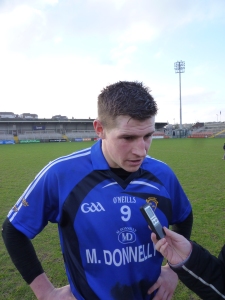