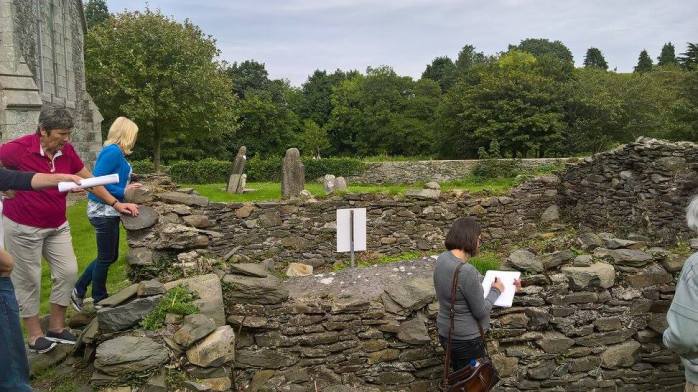 Inniskeen Heritage was reformed at a meeting in the Community Centre on Monday last. Great interest has been generated in heritage recently by the publication of Matt Kearney’s book on the McMahon burial vaults in the old graveyard. A heritage plan for the graveyard is being drawn up and the group intends to seek LEADER funding for the conservation of the vaults and the surveying and promotion of the whole village with respect to its early Christian heritage.

The group acknowledges the advice and assistance of the County Heritage Officer, Shirley Clerkin and of Larry McDermott, a member of the original group who now sits on Monaghan Heritage Forum.

It is hoped to stimulate a wider interest locally in the history of the parish. The group plans to hold a public consultation meeting in the near future. You can contact them via email at: inniskeenheritagegroup@gmail.com or speak to any of the committee members with suggestions or contributions.

The four sites are:

The sites have a wide range of significance values including archaeological, historical, cultural, religious, social, natural and economic. They are geographically spread, and as a result involve a number of parishes and their associated communities. In all cases local groups exist that are keen to manage and understand these sites more effectively.

It’s proposed that three conservation plans in an appropriate and agreed format for the Early Christian sites at Clones, Inniskeen and Killahear should be developed with the communities. A series of evening and/or weekend workshops with the local communities who manage the sites would be held to develop an understanding of early Christian Ireland, monasticism and an appreciation of the wide range of heritage values associated with each place.

According to the County Council, the groups including Inniskeen are very enthusiastic about the project. They intend to help channel that enthusiasm into positive outcomes for the sites. It is intended that the groups will work together on common themes and will focus separately on the site in their own community.