COPYRIGHT NOTICE: THE PHOTOGRAPHS AND RESEARCH EXCEPT WHERE STATED ARE © COPYRIGHT  © OF THE AUTHORS   MICHAEL FISHER/MARIE McKENNA/RUBY HEASTY/HEATHER STIRRAT    AND MAY NOT BE REPRODUCED WITHOUT THEIR PERMISSION 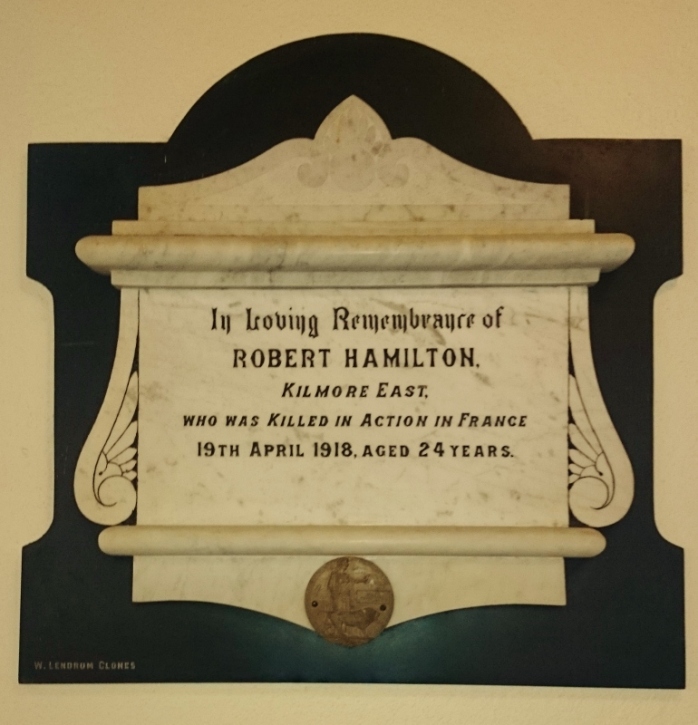 My talk has been sparked off by this plaque in St Dympna’s church of Ireland church, Ballinode, which will be open afterwards. Some have wondered why I have taken up the very kind invitation to give this presentation by Marie McKenna and others. I myself do not have any direct relatives who died in the Great War. I have however taken an interest in history and in commemoration mainly because of my childhood in England, including part of my secondary education up to ‘O’ level at a Jesuit school, Wimbledon College. 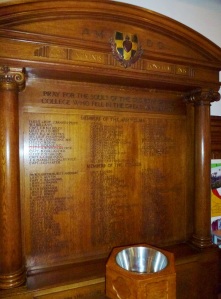 During my four years there I often passed this memorial at the back of the chapel when we attended Mass. I was proud of the story of an Irishman who won a Victoria Cross in the Second World War: Royal Navy Lt Commander Eugene Esmonde, the naval pilot who led the attack on the Bismarck. But there is one other VC on that list, also an Irishman, whose Wimbledon College connection I became aware of only recently in the Jesuit Missions magazine. He is Lieutenant Maurice Dease VC, born in Coole, Co. Westmeath. Dease attended Stonyhurst College SJ and then transferred to the Army Class at Wimbledon, before going on to Sandhurst to complete  training as an officer. The memorial is one of thousands you will see throughout Britain, Northern Ireland and in some parts of the Republic.

I am particularly pleased that the meeting tonight is in Ballinode parochial hall. The plaque near the entrance shows the former school was renovated and extended in 1906. It was just over 100 years ago when members of the local community gathered here shortly after the start of the Great War in August 1914. The purpose was to support the war effort by raising money for the National and Belgian relief funds. Heather Stirrat will read the extract from the Northern Standard for us:

SUCCESSFUL CONCERT IN BELLANODE
On Friday evening 30th ult; (=last) a most successful concert under the auspices of Bellanode & Scotstown Work Party was held in the Parochial Hall, Bellanode, in aid of the National and Belgian Relief funds. The promoters, Mrs Greene, Cappagh Lodge; Miss Richardson, Poplar Vale, and Miss Reid, Lemaculla, deserve congratulations on the success attending their efforts, as from every point of view it was the most successful concert ever held in the building.

The chair was occupied by Colonel Lucas Scudamore, who referred in touching terms to the objects  for which the entertainment had been promoted, and pointed out the necessity for each and every one doing their very best to relieve the suffering of the unhappy Belgians driven from their homes by the Germans, who had shown a barbarism in the present war that was utterly astounding, and also to relieve the necessities of   the dependents of our soldiers and sailors. The programme, which was of a highly appreciative character, was contributed to by Miss Richardson, Miss Jamieson, Miss Lucas Scudamore (fancy dance), Miss Brydon, Miss Turley, Miss Wright (recitation), Miss Rea, Revs. R.H.Robinson and I. a G.Eccles, Messrs.J.C.Wood, D.Hanna, A. Wilson, —  Scarisbrick, A. Begas (pianoforte solo), and T.J.Kennedy, and Masters J.Wright, K. McAlpine, and E. McAlpine. An interesting feature was the patriotic songs illustrated by lime light pictures and a series of war pictures. The programme concluded with the Belgian, French, Russian and British National Anthems, played by Mr. Begas. The thanks of the concert committee are tendered to Miss Jamieson for the use of her splendid piano, to Mr W.J. Crawford J.P., who provided and manipulated the magic lantern, and to Mr. Robt. Moffett and Mr. Ross Kennedy for the use of their motor cars in conveying the performers from a distance.

At that stage Robert Hamilton had not yet joined the British Army and was residing in Ballinode. So how do we put together a picture of his life? Let’s start at the beginning.

Robert Hamilton was born on February 21st 1892 in Clabby, County Fermanagh. The death notice and anniversary notices in the Northern Standard show he was the son of Mary Hamilton of Kilmore East, Ballinode. Tonight I can reveal more details about this soldier of the Great War.

Mary Hamilton was unmarried at the time of his birth. So she must have been faced with a difficult choice given the mores or social conventions of society at the end of the 19th Century. Pregnant single women in her situation would have been ostracised and had to give birth possibly in a home or the local workhouse. Cliona Rattigan in her book (2012) on Single Mothers 1900-1950 reminds us that:-

“Unmarried mothers were shunned by society….While many women concealed their pregnancies from their employers because they would have been fired, others hid it from their family for fear of being put out or in some cases a more violent reaction…The law itself conspired to create unfavourable conditions for unmarried mothers…There was no law that allowed for legal adoption and the foster services that did exist were private arrangements, which had to be paid for.” 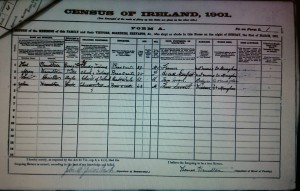 Mary Hamilton carried her baby apparently for the full nine months term and was then faced with the reality of how she was to bring up her son Robert. Before giving birth, she might have been residing in Kilmore East in the house of her younger brother Thomas, a single man, and head of household, along with his uncle John who is listed as a farm servant. This is an assumption however based on the 1901 census return.

We now know that some time before she gave birth, she went to a couple about thirty miles away in Brockagh, Clabby, beyond Fivemiletown, – John and Jane Keys. Thanks to Jean Armstrong (wife of the local rector) we now have details of the birth. Her husband Reverend Maurice Armstrong tells us that Robert must have been a very delicate baby, ‘poorly and weak’ as he was baptized just three days after his birth. 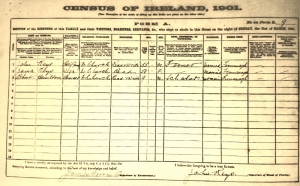 The 1901 Census reveals that Robert then aged 9 had been boarded out and given into what amounted to foster care by the Keys. John Keys was a small farmer at Brockagh, a mountain area near Clabby. Robert is listed as a scholar, so he must have attended a local school. John Keys and his wife Jane were in their mid-50s, possibly childless, and both were members of the E(stablished) Church, the same denomination as the Hamiltons (Church of Ireland).

So although Robert’s birthplace was Fermanagh, I think he can truly be regarded as a Monaghan man. Jane Keys died in 1906 at the age of 65. Her husband John followed months later. Having been admitted to the workhouse in Enniskillen shortly after Christmas 1906, he died there on June 1st 1907 at the age of 52. According to Reverend Armstrong, it appears that Mr Keys was destitute and not coping after his wife’s death. Young Robert would have been sent back to live with his mother in Ballinode in 1906, aged 14. 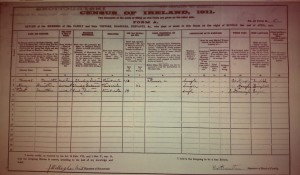 The 1911 Census confirms he has been brought back to Ballinode and is living with his mother Mary in Kilmore East.

He was then 19 and like his mother is listed as a servant in the household of Thomas Hamilton, a farmer and Mary’s younger brother. Mary was 52. This edited picture kindly supplied by the Mohan family shows the house at Kilmore East after they had extended it many years ago. The original building was a single storey, as can be seen on the left hand side.

The following year, Robert’s signature and that of his uncle are among those of nearly quarter of a million men included in the Ulster Covenant. 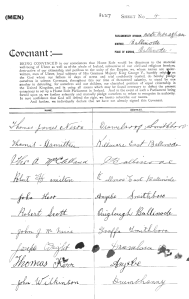 They signed in Ballinode on September 28th 1912 and the declaration was signed on the same day by Mary Hamilton.

This was the time when leading Protestant landlords in County Monaghan such as Major Edward Richardson of Poplar Vale were supporting the establishment of the Ulster Volunteer Force in opposition to nationalist demands for Home Rule. Quincey Dougan in a talk last year has described how the UVF formed two battalions in County Monaghan between 1912 and 1914. 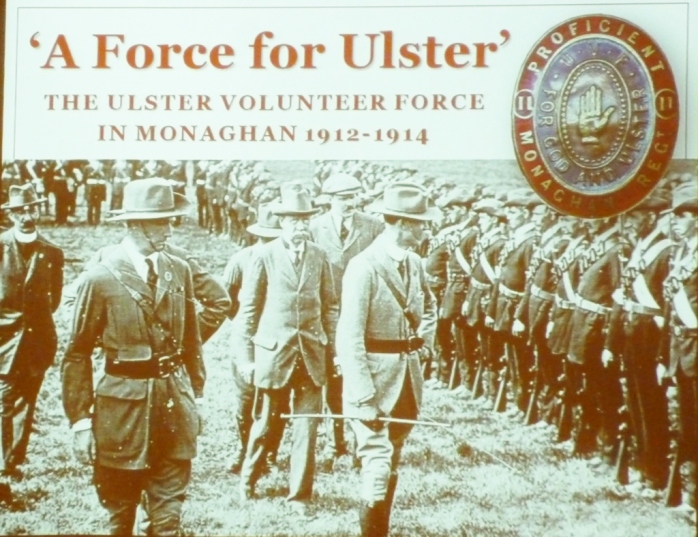 PLEASE NOTE: EXCEPT WHERE STATED THE PHOTOGRAPHS AND THE RESEARCH ARE © COPYRIGHT 2014 MICHAEL FISHER/MARIE McKENNA/RUBY HEASTY/HEATHER STIRRAT AND MAY NOT BE REPRODUCED WITHOUT THE AUTHORS’ PERMISSION