It was a journey I didn’t want to make. Fifteen years ago on this same Sunday, I left Tydavnet around 8am and headed for Omagh. I attended Mass at St Matthew’s, Garvaghey (the chapel associated with John Montague) and then made my way to the county town. Market Street was full of debris and the whole area was cordoned off as a police investigation got underway. This morning I repeated the journey, passing the chapel at Garvaghey at 8:30am and heading to the Sacred Heart church in Omagh for Sunday Mass. 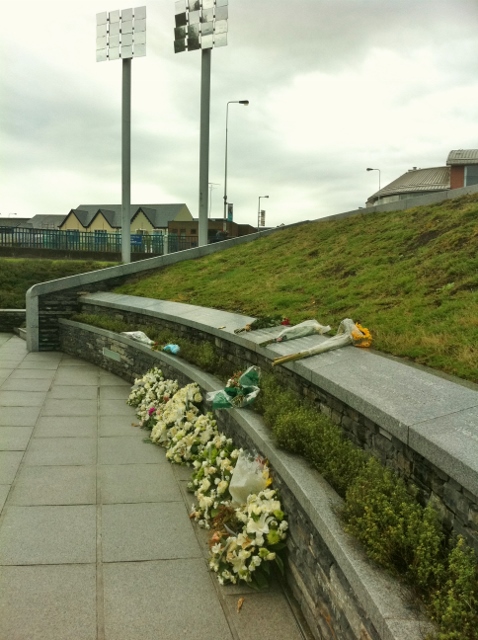 I was surprised that there was no mention of those who died in the 1998 bomb, although the priest did ask for prayers for those in Egypt and Syria. Perhaps the bomb victims were remembered at Mass last weekend. There was also a commemoration in the town on Thursday 15th, the exact day of the atrocity. This morning there was a very different view along Market Street, looking towards the Courthouse, as my first picture shows.

The previous afternoon in 1998, after coming home from the Tydavnet Show, which I was also at yesterday, the news had come through about a major bomb attack in Omagh, with several casualties. I headed off to Omagh that Saturday evening and reported from Tyrone County Hospital as the extent of the fatalities and the injuries became clear.

Some Spanish women were desperately trying to find out more information from the hospital staff. In the operating theatres, Dr Dominic Pinto, who I met later this morning at a separate commemoration for the victims of the Ballygawley bus bomb, and his colleagues were working non-stop trying to deal with the injured. Many had to be transferred to other hospitals for further treatment. Mr Pinto described the scene at the time:

“When I came to the front of the hospital, it was absolutely quiet. What greeted me when I got into the main corridor was sheer pandemonium. This was not a major incident, but a major disaster of battlefield proportions. There were people lying in corridors of the    accident and emergency department, overflowing into the radiology department. Some 240    injured people arrived within the first 45 minutes“. (www.wesleyjohnston.com)

The Spanish connection later turned out to be a group of students who had been studying English in Buncrana and who had got caught up in the explosion during a trip to Omagh. One 12 year old Spanish boy Fernando Blasco Baselga from Madrid died as well as a 23 year-old teacher from Spain, Rocio Abad Ramos, also from Madrid.  Three young boys from Buncrana, Oran Doherty aged 8, 12 year-old Sean McLaughlin, and James Barker, also 12, were killed in the explosion. In April 2000, the body of James was re-buried in a small graveyard at his former school in England, St George’s in Weybridge. I remember visiting it in 2008 when I interviewed his father Victor.

Three generations of women from one family in County Tyrone were killed in the Omagh bomb: a 65 year old grandmother, Mary Grimes from Beragh, her 30 year old daughter Avril Monaghan who was expecting twins, and an 18 month-old granddaughter, Maura Monaghan from Aughindarragh in Augher. I remembered them as I visited the peaceful graveyard at the Forth Chapel, Ballynagurragh (St Macartan’s), where my McCann relatives are interred close to Avril’s grave.

Then at the Ballygawley bus bomb commemoration I met Michael Gallagher of the Omagh Support and Self Help Group. His 21 year-old son Aiden was killed in the Omagh attack. Michael went on to attend the service at Newtownsaville Church of Ireland church for the Ballygawley bus victims (eight British soldiers) and five other members of the security forces who had been killed in two other incidents in the surrounding area. Another victims’ campaigner to attend the Ballygawley commemoration was Stephen Gault, who was injured and who lost his father in the Enniskillen bomb on Remembrance Sunday in November 1987.