Michael Fisher at the RDS 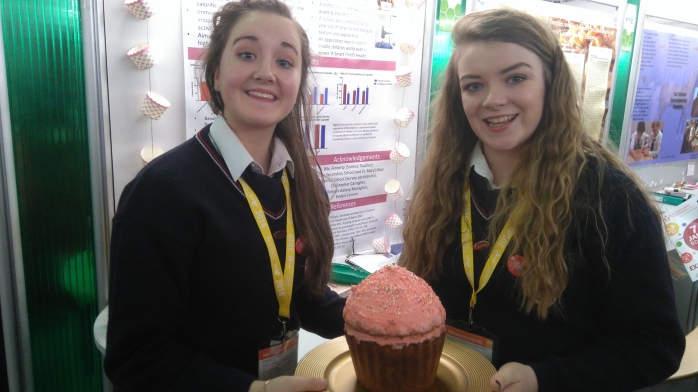 Cupcakes with no sugar or salt and with a banana mix proved a winner for two young students from County Monaghan at this year’s BT Young Scientist and Technology Exhibition held last week at the RDS in Dublin. Simone Clerkin and Alison McDonnell, transition year pupils from St Louis Secondary School in Monaghan, were highly commended for their project on a healthy diet for children in the biological and ecological sciences section. Under the heading “Smart Substitution” the pair examined the need for healthy alternatives to high calorific ingredients in an attempt to reduce obesity in young children and increase their nutrition intake.

Their project was based on statistics in a 2007 Department of Health survey showing that 11% of boys and 12% of girls in Ireland are obese. Children who are obese are likely to be obese as adults. Nearly half (48%) of Irish people take snacks between meals. So it is crucial to provide a healthy, nutritious, low calorific snack. The students realised that immediate action was required to highlight the importance of healthy eating and regular physical activity. So they aimed to create a novel and nutritious recipe that would highlight the ease of smart substitution.

Simone and Alison came up with a new recipe for cup cakes. They baked cupcakes using a standard recipe of 113g sugar with the same amount of butter, 117g of flour, three eggs and salt. Then they made alternative cupcakes with a high energy value, using half the amount of butter, slightly less flour, no sugar or salt, two eggs, and a half teaspoon of lemon juice (increasing the level of vitamin C). The fat content of 113g of sugar was replaced with half the amount (56g) of bananas. They provide high levels of potassium, which is known to reduce blood pressure. A calorimeter was used to quantify the calorific value of both types of cupcake. The students then conducted a survey on a group of 11-13 year-old children to test the taste, texture and appearance of the cupcakes. An app was also created to enable children worldwide to access “A Smart Child’s Health”, supporting healthy eating by young children.

So how did the low calorie, wholesome, tasty recipe using bananas work out? Girls in the 11-13 category given samples of the two cupcakes were shown to prefer the taste of the original recipe, but liked the texture and appearance of the substitute cupcake. Boys in the same age group (from St Mary’s Boys National School) showed a much greater preference for the taste of the substitute cupcakes, as well as favouring their texture and appearance. In future Simone and Alison say they hope to investigate smart substitutes for a larger array of foods. They hope the application could be improved to include savoury ingredients and it should be made available on android and iphone devices. 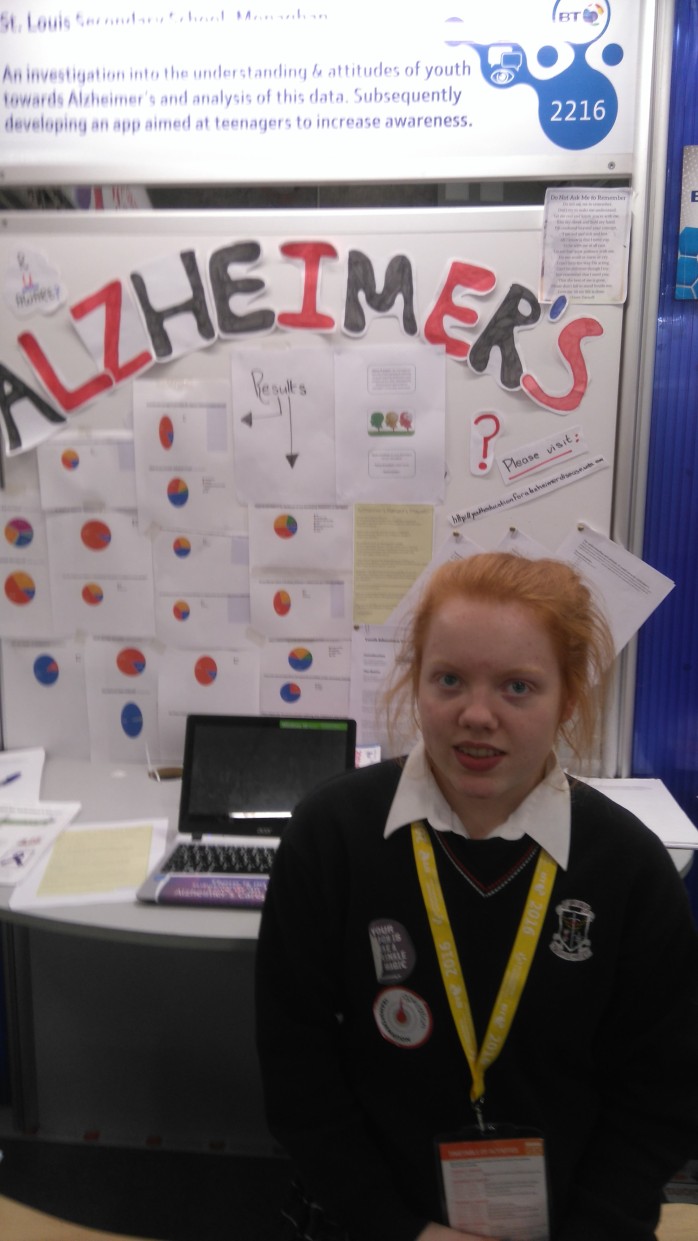 Their school colleague Isabel Doyle also entered a project in the intermediate age group. Hers was in the social and behavioural sciences category. The St Louis student undertook an investigation into the understanding and attitudes of youth towards Alzheimer’s. She analysed the data, subsequently developing an app aimed at teenagers to increase their awareness of the condition. She has also set up a web page to promote youth education for Alzheimer’s at www.youtheducationforalzheimerdisease.beta.com

The homeless crisis in Ireland prompted Aaron Quigley from Inniskeen and Drumconrath resident James Carolan from Patrician High School in Carrickmacross to come up with a way of tackling it on an individual basis. They developed a simple sign in the shape of a heart containing the message ‘Hope for a Heart’. Volunteers can hang this outside their doors to indicate to a homeless person that they are welcome to come in and get a glass of water or get a snack or use the bathroom. The homeless person is also provided with a yellow knapsack containing useful items such as a bottle for water, an energy blanket, hand warmers and a readymade all-day breakfast meal that can be activated by pouring cold water onto the pack. The students carried out a survey among 300 people in Dundalk, Navan and Dublin and say they got a great response to their idea, with 70% of the respondents reacting positively.

Conor Greene and Paul McEntegart along with Colm Bermingham

Three other Carrickmacross students from transition year at Patrician High were represented in the same section on social and behavioural sciences. Conor Greene and Paul McEntegart along with Colm Bermingham displayed their project on computer games and deductive reasoning, entitled “Can video games make you Sherlock Holmes?” Deductive reasoning is the skill in which a conclusion is based on the agreement of multiple premises that are generally assumed to be true. The trio examined the deductive reasoning powers of test subjects who were chosen from years 1-4 at the school, at the start of the project and again after a five weeks period to enable them to measure any change. To analyse any factors relating to gaming they asked their subjects to complete a weekly survey of their playing habits. They used a small control group who played less popular video games to ensure they were covered. Players at the end of the test period showed improvements in the genres of action, creative, strategy and puzzles but a decrease in the field of sport. Over two-thirds (68%) of subjects improved their scores, 23% did not change and 9% disimproved. The students say the results indicated that deductive reasoning is improved through playing video games, especially playing strategy and puzzle games.

Authority areas). They wanted to investigate if the water supply people paid for was fit for purpose. During their primary research they discovered that the lead levels in drinking water supplied from group water schemes and private drinking water supply are 99.9% compliant with the EU limit at 10 micrograms per litre of water.

Their secondary research involved collecting samples of water for lead analysis from group water or mains water schemes where there was lead piping. Water was shown to have increased lead levels the longer the water was in direct contact with lead only.

Altogether 2048 projects were entered for the exhibition from 396 schools throughout Ireland. 550 projects were accepted for participation, involving 1134 students. Nearly three-quarters were group projects and just over a quarter were individual projects.