ONE HUNDRED YEARS OF KILLEEVAN GAA AND PARISH 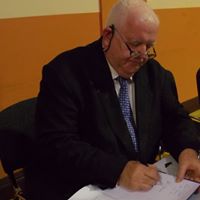 John Patrick (JP) Graham from Killeevan is best known for his reports and commentaries on GAA matters. But the journalist is also a local historian. Earlier this year he produced a wide-ranging history of his local Club and parish entitled: “Killeevan Sarsfields GFC: A Centenary History 1915-2015 and a Parish Record”. The book (price €20) has been re-launched in time for the Christmas market and makes an ideal gift for those who have left the area and are living away from home, to remind them of their roots. 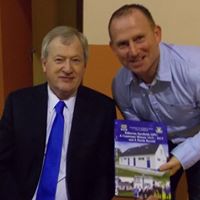 GAA Director General Paraic Duffy at the launch of the book

JP set out to record and document the efforts of the founding fathers and the successive generations of people who contributed to the parish. The Director General of the GAA, Paraic Duffy, described the publication as very impressive. He paid tribute to the author for his ‘labour of love’ and for his unfailing, lifelong commitment to the GAA at club and county level. The book is dedicated to JP’s grandson and godson, Aaron Patrick Graham and his other five grandchildren are included in that dedication.

This book traces the story of Killeevan Sarsfields from its foundation back in 1915 when the club was formed by amalgamating the two clubs that existed in the parish at that time, Greenan’s Cross Tir na nOgs and Ture Davitts. The centenary publication traces the development of the club through its glory years in the 1920s, 1930s and 1940s when Killeevan were regarded as Kings, winning the Monaghan senior double of league and championship in 1944. Thereafter the club enjoyed something of a chequered history and went out of existence for one year. But they rose from the ashes to win the intermediate double in 1974 and enjoyed further success in junior ranks in the 1990s.

The official opening of Sarsfield Park in 1983 was a highlight and the book covers in some detail the last couple of decades. Success on the field proved elusive, but a major infrastructural development programme was completed in time for the centenary year. Other aspects of parish history and life are included, with sections on Newbliss village and the development of education in the parish, including records from the old Killeevan National School.

In his introduction JP Graham says he has “tried to give a flavour of all aspects of club activity and the people involved…with a special emphasis on the games and the players. I have also tried to factor in some aspects of the social life of Killeevan club and parish, because the club is central to the parish and touches practically every family in the area”.

The book (published by R&S Printers Monaghan) contains 370 pages and is on sale in Martin’s Londis, Newbliss, Matthews of Clones, and the Eason Bookshop, Monaghan, or directly from the author.