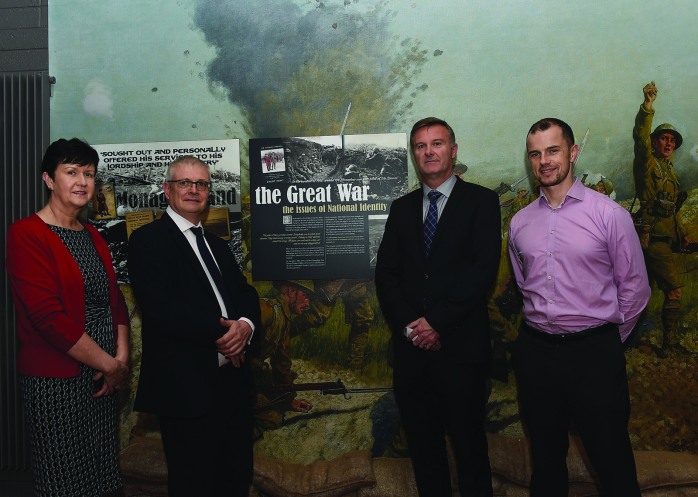 The British Ambassador to Ireland, Robin Barnett CMG, paid a visit to Monaghan County Museum recently. The Ambassador was met by the Curator, Liam Bradley, Monaghan County Council Chief Executive Eamonn O¹Sullivan and Administrative Officer Carmel Thornton. The Ambassador was taken on a tour of the museum¹s current exhibition, “From a Whisper to a Roar: Exploring the Untold Story of Monaghan 1916.” Liam Bradley explained what life was like in the county directly before the Easter 1916 Rising politically, economically and socially and how that changed so dramatically following the bombshell of the historic events in Dublin and around the country.

The other focus of the display is the Battle of the Somme. The Curator noted it was estimated that nearly one hundred Monaghan men died during that terrible battle which took place from July 1st to November 18th 1916. Ambassador Barnett noted that this year of commemorations was an opportunity to explore the full story of this period in Irish history. He remarked on the recent event at Glasnevin Cemetery in Dublin, where a Castleblayney man, Thomas Hughes, was commemorated for receiving the Victoria Cross during the Battle of the Somme. Private Hughes VC is one of the key characters explored in the museum¹s exhibition on the historic year of Monaghan 1916.

At the end of his visit the Ambassador thanked the Museum Curator and the staff of the museum for developing such a fascinating display. He expressed a keen interest to return when he had more time to view all of the museum displays. Chief Executive of Monaghan County Council Eamonn O’Sullivan thanked Ambassador Barnett for taking time out of his busy schedule to visit the museum and also thanked the museum staff. The exhibition formed the backdrop for the special celebration marking what would have been the 100th birthday of Sir Jack Leslie of Castle Leslie, Glaslough.