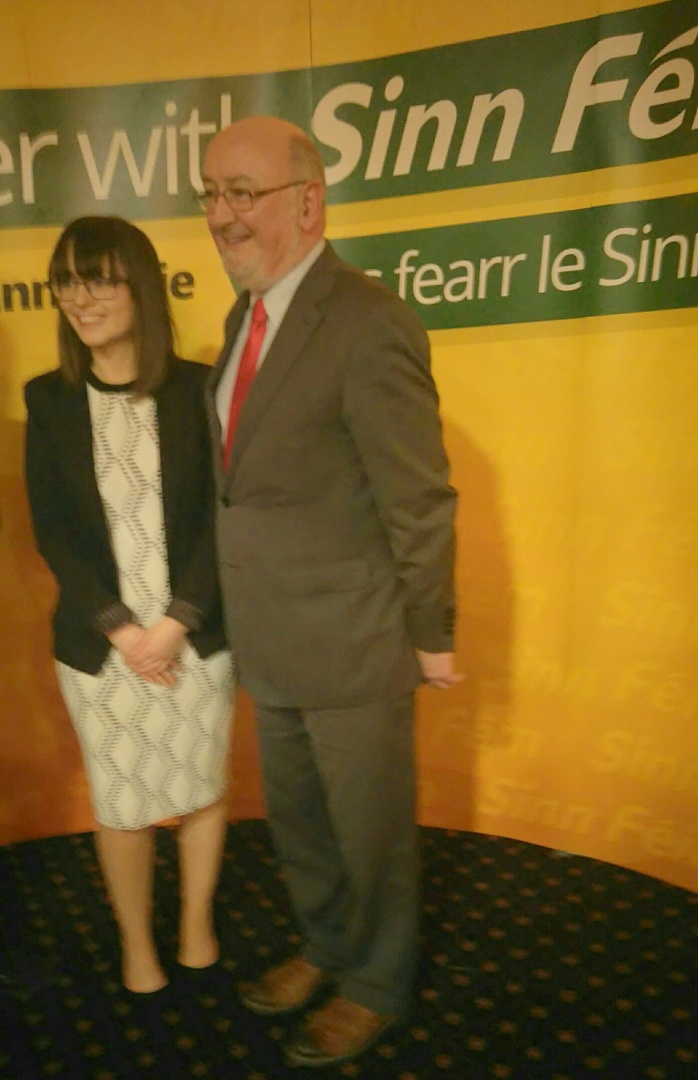 Sinn Fein launched their general election campaign for Cavan-Monaghan in Cootehill. The election has not yet been announced but deputies are widely expecting to get their marching orders next week when the Taoiseach will probably set a date. The Sinn Fein duo of Senator Kathryn Reilly seeking #1 votes in Cavan and Caoimhghin O Caolain looking for first preferences in Monaghan seem confident they can take two of what will now be four seats up for grabs. 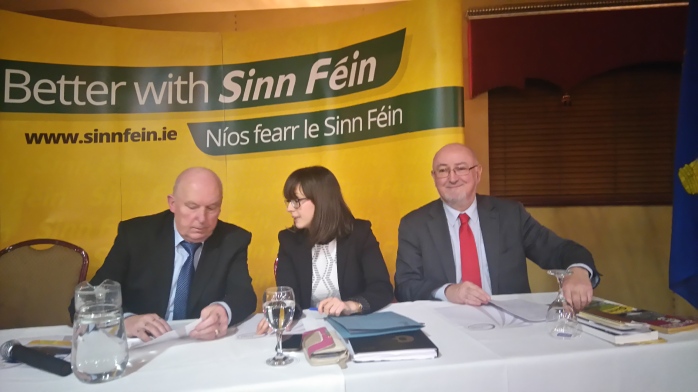 Launch of SF election campaign in Cavan and Monaghan

A large chunk of West Cavan with 36 DEDs centred around Ballyconnell and Swanlinbar has been chopped off and added to Sligo/Leitrm which also takes in a small part of south Donegal including Ballyshannon and Bundoran.

The troops were rallied by MEP and national director of elections Matt Carthy from Carrickmacross. 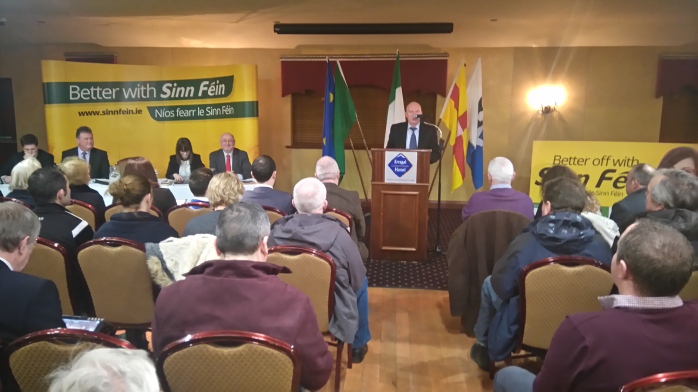 SF supporters at the campaign launch

See next week’s Northern Standard for a full report.

“In 2016, we have an opportunity to take a further step towards achieving the vision of 1916.

“There is a lot of positivity, energy and enthusiasm around this campaign.

“We have been out knocking on doors for months now and I have been getting a very warm response, which is encouraging. Ordinary people are genuinely angry and fed-up at the way they have been treated by this government. They are looking for a Government who will stand up for them. They are crying out for effective representation in the Dáil.

“Sinn Féin is confident of winning two seats in Cavan/Monaghan. We will be running a positive campaign, offering solutions to the chaos of the Fine Gael/Labour Party government.

“Sinn Féin will be offering the people of Cavan/Monaghan a real alternative to the crisis in housing & health care caused by this government and its Fianna Fáil led predecessor.

“Sinn Féin has clearly set out a range of progressive, fully costed proposals, which would bring about a fairer, more equal and inclusive society. Our message is resonating. A Sinn Féin government will deliver a fairer recovery, with decent jobs. We would defend and invest in our critical public services. We want a fair and progressive tax system. We would scrap both water charges and the property tax.

“It is up to ordinary workers, communities and families across this constituency, who have suffered as a result of this Government’s policies, to join with us in the campaign and help us to make history in 2016 by returning two Sinn Féin TDs for Cavan/ Monaghan. I am inviting everybody who believes in that vision to come along to my launch on Friday night to show your support.” 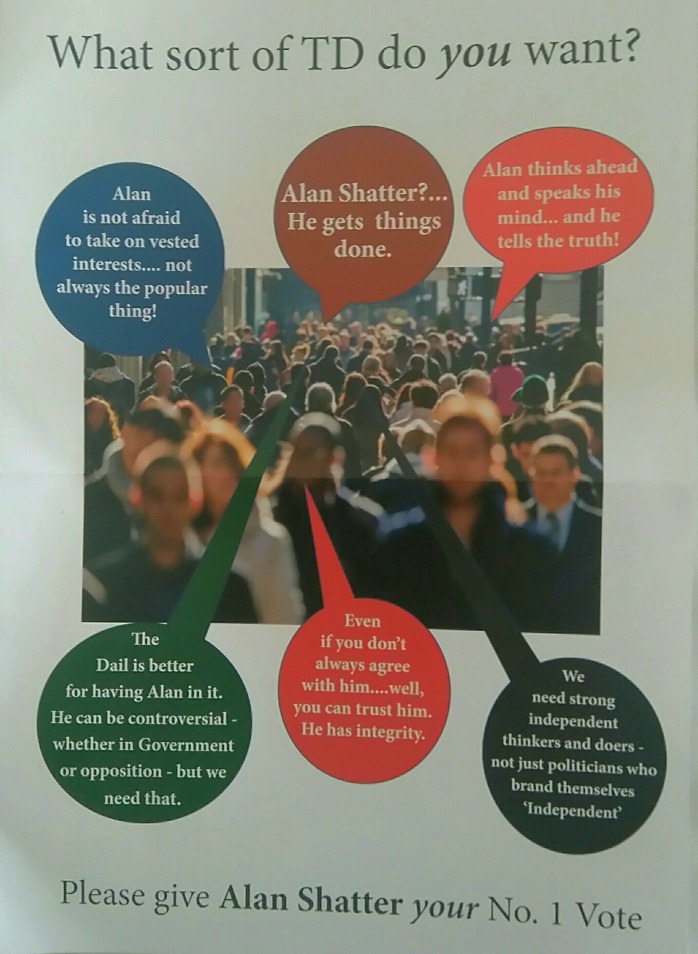 Interesting to see a leaflet issued on behalf of Alan Shatter T.D. seeking his re-election. He is getting in ahead of the posse in Dublin Rathdown. Interesting because it is a personalised leaflet with no Fine Gael logo or picture of the man himself, who is currently on the FG back bench, having served as Minister for Justice. On the reverse side there is a direct attack on Sinn Fein policies and a stout defence of a government led by Fine Gael. It calls for a vote #2 for FG constituency colleague Cllr Josepha Madigan, whose face has already appeared on dozens of election-type posters advertising public meetings in the past year. Finally it calls for a supporting vote for Energy Minister Alex White TD of Labour. As I reported in these columns recently Alex White was the subject of a no-vote protest by anti- wind farm and anti-pylon  Campaigners. 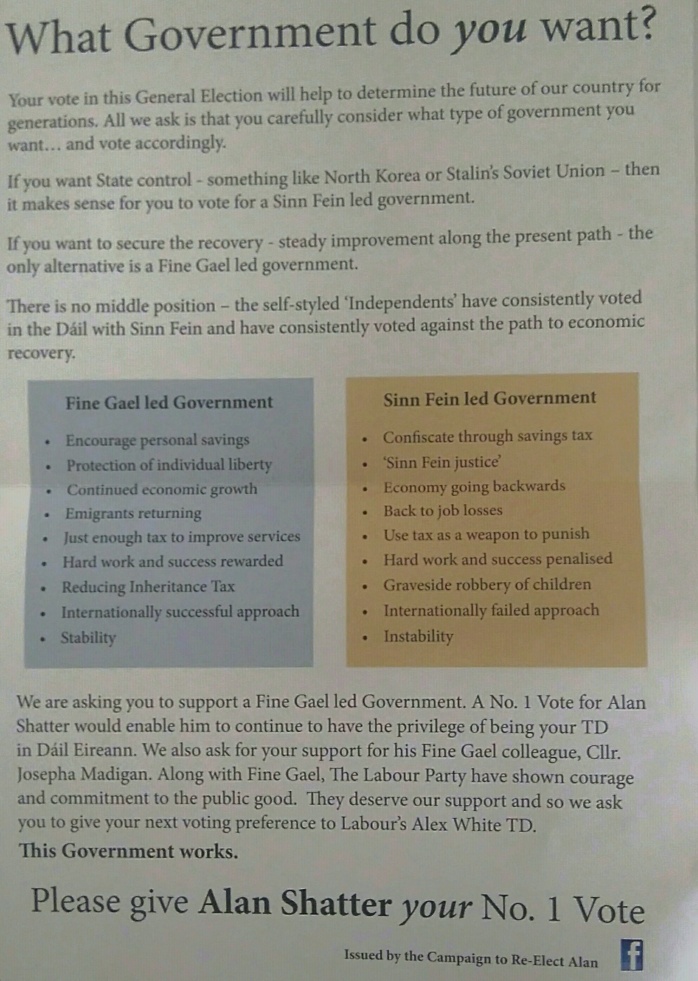 Reverse Side of Leaflet

Bailieborough Councillor Niamh Smyth confirmed tonight on her Facebook page that she has been added to the ticket by Fianna Fáil headquarters to contest the general election in Cavan/Monaghan. 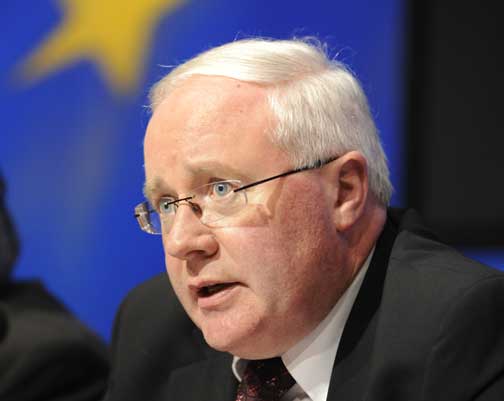 Outgoing TD and former Minister Brendan Smith was the only candidate selected at a recent constituency convention, which left a shortage of a female candidate and also no-one from the Monaghan end, where Dr Rory O’Hanlon was once the vote-getter. It will be interesting to see if a third person is added to the ticket from the Monaghan end and my guess is that whoever is chosen will also be female (although Cllr Seamus Coyle had shown an interest at one stage). This would help FF to reach the 30% quota of female candidates they need to qualify for a handout from the state in order to bring more women into politics. 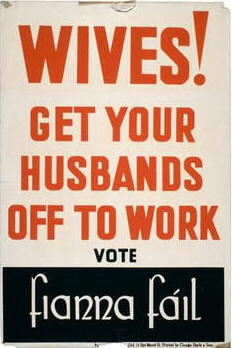 Election Poster from the Fianna Fáil archives. Times have changed a lot since then…